The Ministry of Health has reported 195 new coronavirus infections throughout Spain and five new deaths during the last 24 hours. In total, it has confirmed 27,133 deaths since the pandemic began, 59 of them have occurred in the last week.

In addition, also in the last week, Health has registered 166 hospitalizations and 11 ICU admissions.

The doctor said that “in the last 15 days in Spain, between 10,000 and 11,000 patients suspected of coronavirus have been identified and analysed every day.

After four days of good news, the Valencian Community has suffered a total of 5 deaths, four of which have taken place in nursing homes in the last 24 hours. In addition, 11 people have tested positive for PCR.

This was announced by the Minister of Health, Ana Barceló, in a conference this afternoon where she also announced the implementation of different plans for de-escalation in the Valencian health system.

Of the new infections registered since the last update, 2 have occurred in the Castellón province, 4 in the Alicante province and 5 in the Valencia province. The total number of cases accumulated since the start of the pandemic is 11,265 infections. 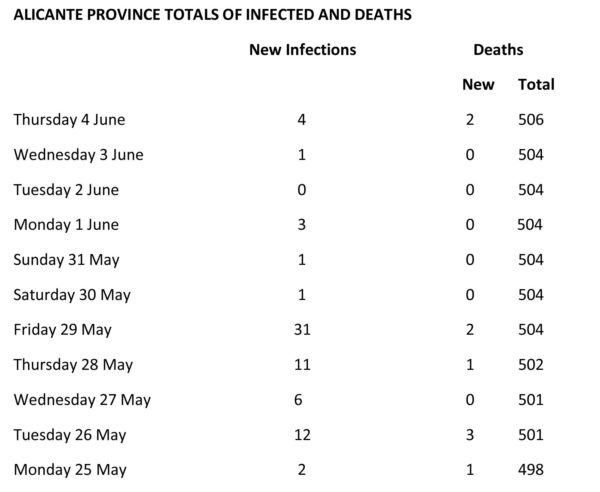 With regard to discharges, 12,608 are accumulated, which totals 147 in the last 24 hours, most of them in the province of Valencia with a total of 97. In Castellón there have been 2 discharges and in Alicante 48.

There are 157 people admitted in hospitals of the Valencian Community, 8 less than yesterday. Of these, 16 are in the Intensive Care Units, 6 fewer than yesterday. By provinces, in Castellón there are 15 admitted (3 in the UCI), 57 in Alicante (8 in the UCI) and in Valencia 85 (5 in the YCU).

Thursday’s day also leaves 5 deaths – after four days without any – of which 4 are in nursing homes. By province, there has been 1 in Castellón, 2 in Alicante and 2 in Valencia.

Barceló said that “the good news” since the last update is that there are 16 fewer centres with positives. The total is 58 centres: 8 in Castellón, 17 in Alicante and 33 in Valencia.

In addition, there are 28 residences under active surveillance by the ministry: 8 in Castellón, 7 in Alicante and 13 in Valencia.