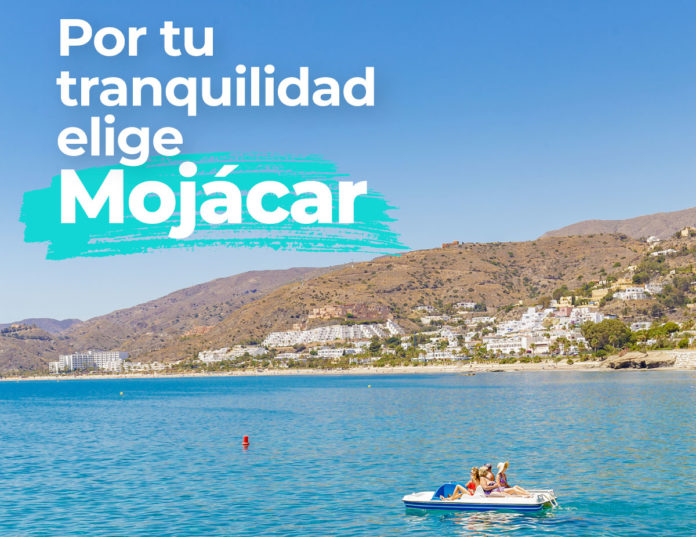 Mojácar Council’s Tourism Department has launched a campaign targeted, in the first instance, at the domestic market with the slogan, “POR TU TRANQUILIDAD, ELIGE MOJÁCAR.” First broadcast through social networks as the town’s beaches reopened at the end of May, it received a great reaction, which a few days later transformed into a much larger drive throughout Spain, through online and offline media.

Over two million hits are anticipated soon, which will undoubtedly increase with the additional concepts that are to be set in motion.

With a slogan that encourages visitors to choose Mojácar for a safe, peaceful, relaxed holiday, the campaign sets out to show what the town has to offer.  As one of the most beautiful towns in Spain, it boasts an old town full of history, a huge variety of accommodation, gastronomy and shops, as well as all the leisure and sports activities on offer.

Of course, for many, the beaches are the attraction, which will be kept even more safe and tranquil this year for obvious reasons.  In Mojácar, everyone can enjoy peace of mind and, with its 17 km of coastline, the beaches are never overcrowded, even at the height of summer season.

From the moment that the state of alarm was declared, Mojácar has sent out an image of a controlled, coordinated, and safe town, which circulated on social networks and, is now being conveyed to potential clients from the national market.  The campaign has been devised by a top agency, with an in depth knowledge of the destination.

A one minute promotional video, along with a general poster have also been designed for the web and YouTube, as well as a range of digital communication materials and animated graphics that will appear on every type of social network as well as online and offline media.

According to the local Tourism Councillor, Emmanuel Agüero Leclerc, this campaign will be complemented by sending out regular images and messages from July, both to strengthen local trade and, keep everyone constantly up to date with the additional safety advice that is in place for this summer. As well digital communication, flyers and posters will be placed at strategic points, as well as on urban buses.

He added that as soon as international borders are officially opened, with dates set for flights into Almería as well as the neighbouring airports of Murcia, Malaga, and Alicante, a second phase of promotion will be launched, aimed at the international market.