Tuesday evening brought the best news we have had in the province since the pandemic began: zero deaths and zero new cases of coronavirus in the previous 24 hours. The news was announced by the Minister of Health, Ana Barceló, on Tuesday evening at a press conference, a meeting in which she took stock of the month of May as “very positive” for the Valencian Community in the fight against the pandemic.

In the last 24 hours there have been no deaths in the entire region, for the third consecutive day.

In the province of Alicante, the number impacted by the coronavirus remains exactly the same as Monday in terms of cases and deaths: 3,924 positive by PCR in total and 504 dead. The discharges, however, have registered an increase as 28 people have recovered in the province in the last hours.

As for new admissions to hospital, there are currently sixty people admitted, 12 of them in ICU in provincial hospitals. Regarding the evolution of the pandemic in nursing homes, there are positive cases in 30 of them, of which seven are under Public Health surveillance.

At Tuesday’s press conference with the media the minister took stock of the month of May saying that it had been “very positive” in regards to fighting the pandemic “in which many people have suffered.”

The month closed with an increase in patient discharges of 78%, which translates into 5,340 people cured in a month in the Community; hospitalisations have been reduced by 82% and 555 less people were admitted than in April. Right now there are 167 people in hospital, one less than Monday, while in the ICU there are 23 patients with covid-19, two less than Monday. 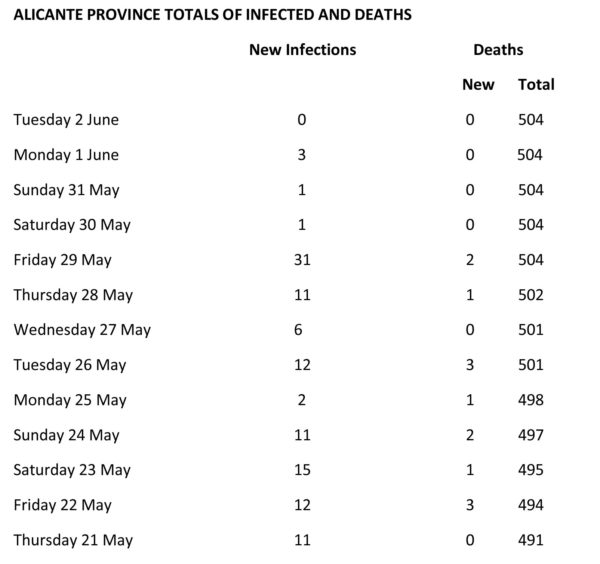 3% of healthcare people have been infected

Of the 56,000 health professionals in the Valencian Community, data shows that the percentage of those infected is 3.21%: “We have not yet concluded the figures because some more tests are missing, but the study, together with the one that has been carried out on the population of the Community, shows that incidence has been very low.”

In fact, the incidence of the virus among the general public has been 2.5%, while nationally the figure rises to 5%. The seroprevalence study for the Valencian Community from which these statistics are quoted is a project of the Ministry of Health, together with the INE and the Carlos III Institute.