The Ministry of Health has not recorded any deaths in the daily report of the coronavirus, for the first time since March 3, so the total number of deaths from Covid-19 continues to stand at 27,127 people, of which 35 have lost their lives in the last 7 days.

There have been a total of 71 new cases in the last 24 hours, which places the total number of people infected, and confirmed by the PCR test, at 239,638.

Admissions to an Intensive Care Unit (ICU), a total of 11,399 people have been treated, of which 9 have been admitted in the last seven days. However, there has only been1 in Andalusia, Canarias (1), Castilla-La Mancha (3), Castilla y León (2), Cataluña (1) and Madrid (1).

Those hospitalised number 123,879 people, 245 in the last seven days, with Melilla being the only region in which no patient with Covid-19 has required hospitalisation. 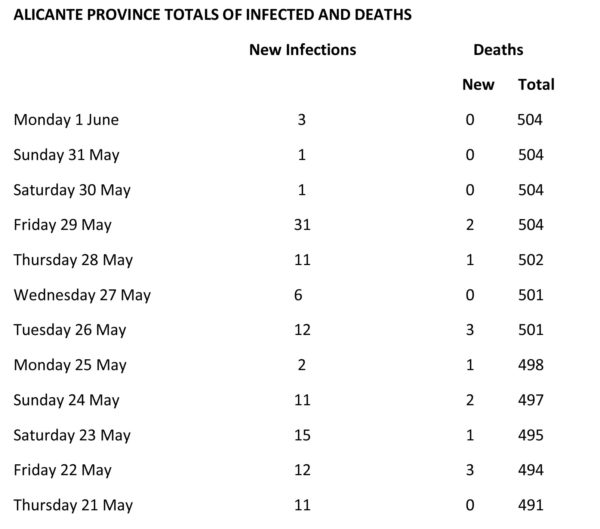 NO DEATHS IN VALENCIA COMMUNITY OR ALICANTE PROVINCE

The Valencian Community has not registered a single death from coronavirus for the second consecutive day but has confirmed 19 new cases since the last update on Sunday (none among workers or residents of care homes). In addition there have been 53 hospital discharges.

By province, there are eleven new cases in Castellón (1,563 in total); three in the province of Alicante (3,924 in total); five in Valencia (5,736 in total) and another five not assigned. In this last calculation, it should be noted that on Sunday there were seven unassigned cases, but one has now been assigned to Alicante and another to Valencia.

Hospital discharges continue to increase and in the last 24 hours, with 53 new discharges registered, bringing the total number of patients cured to 12,232, 75.5% of all cases detected. By provinces, 1,555 correspond to Castellón, 4,330 to Alicante and 6,342 to Valencia.

The number of discharges of health professionals is 2,215 and the total number of cases at the moment is 500. The total number of tests carried out for the detection of the coronavirus numbers  330,143 of which 228,660 have been a through PCR and 101,483 through rapid tests.

UPDATE OF THE SITUATION IN CARE HOMES