Four unnamed Premier League players, from three clubs, were COVID-19 positive following testing on May 25 and May 26 after 1,008 tests were undertaken.

Following Championship clubs returning to training on May 25, three players have tested positive for coronavirus at two clubs.

Blackburn Rovers confirmed Bennett had been tested on May 25 and was found to have COVID-19, but was asymptomatic – showing no symptoms.

Bennett is in isolation for seven days, and will return to training on June 5 if he does not go on to develop symptoms, the club said.

“I feel fit and healthy. Hopefully this sends out a positive message to the community that perhaps many people have or have had the virus without showing any effects,” said Bennett.

“I obviously would never have known if we hadn’t returned to training and taken the tests, because I don’t feel unwell and have got no symptoms whatsoever.

“There seems to have been a lot of hysteria about footballers returning to training, but it’s not a big deal at all.

“It’s the people who are seriously ill in hospital that we need to worry about, not footballers who are fit and healthy, and who aren’t showing any signs of being unwell,” said Bennett, formerly of Brighton and Norwich.

Fulham confirmed two unnamed players had tested positive, not naming the duo, due to medical confidentiality.

COVID-19 tests were carried out on 1,030 players and staff at Championship clubs between May 25-27.

The English Football League (EFL) said in a statement: “Those players or club staff who have tested positive will now self-isolate in line with the guidelines provided by the EFL and only those who have tested negative will be permitted to enter training ground facilities.

“The EFL will continue to make regular and relevant announcements as appropriate in respect of the testing programme to support competition integrity and transparency.

“No specific details as to clubs or individuals will be provided by the league.” 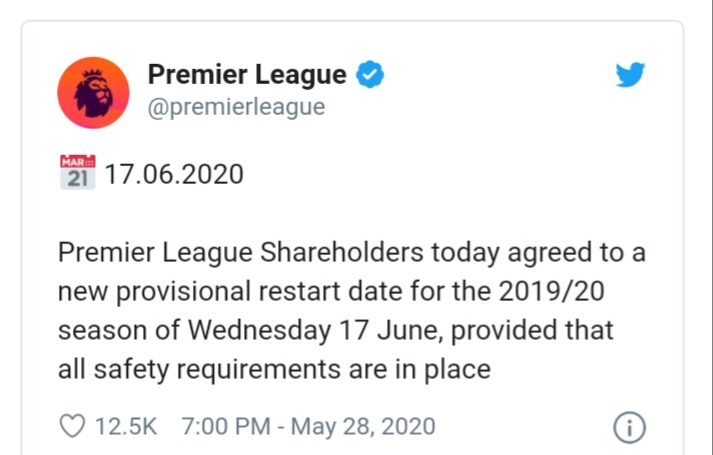 All 92 remaining Premier League fixtures of the 2019-20 season are to recommence on June 17, with games behind closed doors.

The Championship 2019-20 season is also scheduled to restart in June, although no date has been announced.