From today the Ministry offers information on the total number of positive cases accumulated in the last 14 days, diagnosed through PCR, as well as the number of deaths.

The pandemic has reported 24 new cases in the Valencian Community this Thursday, of which 2 are recent arrivals from the United States. In addition, a total of seven people have lost their lives to the virus, one of them in a nursing home.

The Minister of Health, Ana Barceló, said that the number of discharges is ten times higher than that of new cases and currently total 247 since the last update. By provinces, the discharges were: 89 in Castellón, 32 in Alicante and 126 in Valencia.

In total there are 24 new cases. By provinces these infections have been detected: 5 in Castellón, 11 in Alicante and 6 in Valencia. In addition, there are 2 new cases imported from the United States. These data bring the total number of infections to 11,160 since the start of the pandemic.

This Thursday the number of deaths rises to 7 compared to only one that was recorded yesterday. Losses have occurred 1 in Alicante and Castellón, and 5 in Valencia, one of them in residences.

The situation in the residences, according to Health, is as follows: There are cases in 73 Community care homes, of which 8 are in Castellón, 31 in Alicante and 34 in Valencia.

In addition, a total of 28 homes are under active surveillance. By provinces: 8 in Castellón 7 in Alicante and 13 in Valencia. 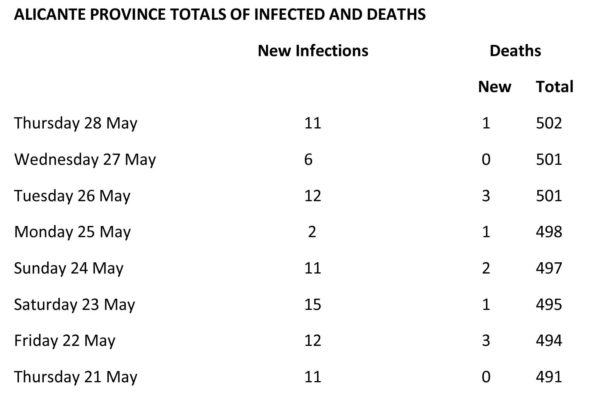 Cases per capita in Alicante Province

The towns of Benidorm, Callosa d’en Sarrià and Vall d’Alcalà have the highest number of coronavirus cases in the province of Alicante, confirmed by PCR according to the data published by municipalities by the Ministry of Health this Thursday.

The highest rate of positives per head of population is in Callosa d’en Sarrià, with 89.52 cases confirmed by PCR for every 10,000 inhabitants. In this sense, Callosa has a population of 7,373 inhabitants and has suffered 66 positive cases with PCR, according to data from the Ministry. The Marina Baixa was one of the first areas of the province to go to Phase 1, before the provincial criteria was adopted. The town was one that had it’s source of contagion in a care home, which could explain why it is the highest in the province.

It is followed by the Vall d’Alcalà, in the Marina Alta, although the data is distorted by the small size of the municipality, where in reality only one case has been confirmed with PCR. However, with just 167 registered inhabitants, the rate of confirmed positives with PCR for every 10,000 inhabitants is put at 59.88 points.

In the case of Benidorm, the third in the ranking, the rate of cases confirmed by PCR per 10,000 inhabitants is 55.73, according to data released by the Ministry. Benidorm, like the rest of the Marina Baixa, was one of the first to move to Phase 1 and reopened many of its shops and terraces in early May.

According to the Health data, it has 68,721 registered inhabitants and 383 positive cases of coronaviruses confirmed with the PCR test.