The Ministry of Health has said there have been a further 35 deaths and 194 new infections from coronavirus in the last 24 hours increasing the deaths to 27,117 and the total diagnosed with the virus to 236,259 as the new data on the progress of the pandemic was presented by videoconference to the media.

The method of data capture was modified yet again by the department of Salvador Illa in order to obtain individualised information on each case in the autonomous communities, and to eliminate duplicates.

With the new system, the notification of deaths this Tuesday, is 35. However, the total number of 27,117 deaths shows a variation of 283 deaths, compared to the total figure provided yesterday (26,834).

Of the 35 reported deaths, Catalonia recorded 9, La Rioja 8 and Madrid (6). In Castilla y León there have been four deaths, two in Castilla-La Mancha, two in the Valencian Community, two in Extremadura, one in Galicia and one in Murcia.

The new cases diagnosed in the last 24 hours totalled 194. The new national data of cases is 236,259, but there has been a revision here too with respect to the one provided yesterday by Health, which was 235,400, with which the new adjustment implies a difference of 859 cases.

In Ceuta, Melilla, Aragón, Asturias, Baleares, Cantabria and Murcia, no new cases have been detected.

Patients requiring hospitalisation in the last 7 days amount to 256, bringing the total to 123,182.

The communities with the most hospitalised are Madrid with 78 new cases, Catalonia with 37, Andalusia with 25, Castilla y León with 24 and Castilla-La Mancha with 22.

The total number of cases that have been admitted to Intensive care (ICU) in the last 7 days are 12: four in Andalusia, three in Castilla-La Mancha, two in Aragon and one in the Canary Islands, Valencia and Madrid. 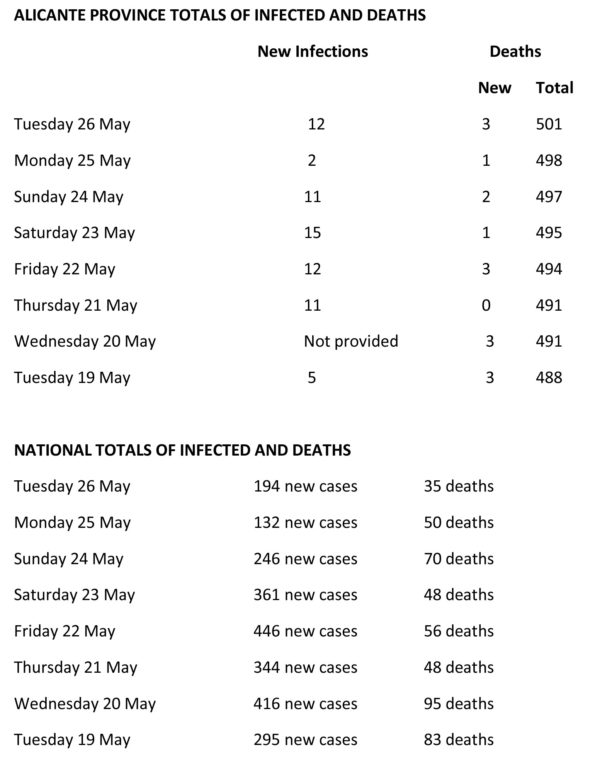 Three more people have died in the province of Alicante in the last hours, according to data provided by the Ministry of Health. Throughout the Valencian Community, 4 people have died, one of them in a care home. There are also twelve new cases confirmed by PCR in the Alicante province of the 32 that have been detected in the whole of the Valencian Community.