As the Valencian Community continued its fight against the coronavirus, which now totals 1,412 deaths and 11,073 infections there have been just 22 new cases and 3 deaths in the Valencian provinces, all in nursing homes.

Of the other data provided by the Ministry of Health, there were 54 patients discharged from hospital in the last 24 hours, bringing the total to 10,866 since the start of the pandemic. This figure represents more than 70% of all cases detected.

By province, the 22 new cases have been detected: 5 in Castellón, 11 in Alicante and 6 in Valencia. In addition, 5 displaced persons are included the total.

There have been 3 new deaths, all in nursing homes in the Community. Since the beginning of the virus, the deaths accumulated by provinces are: 212 in Castellón, 497 in Alicante and 703 in Valencia. For the fourth day in a row, no deaths were registered due to coronaviruses in the province of Castellón.

In Valencian hospitals, the number of hospitalized coronavirus patients has also decreased. There are currently 216 people admitted, 4 less than yesterday. By provinces: 14 in Castellón, 63 in Alicante and 139 in the province of Valencia. 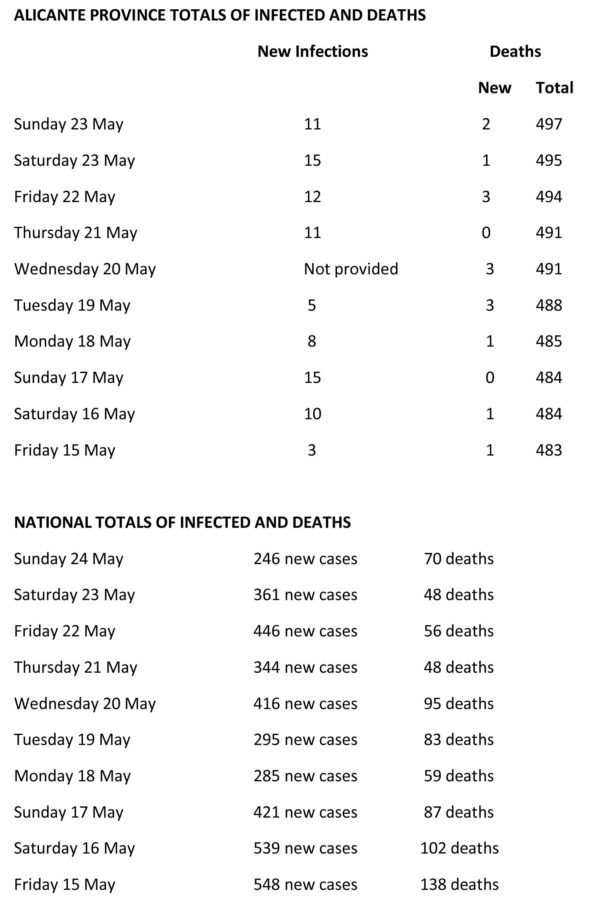 The daily data covering the coronavirus epidemic in Spain continued in the same direction on Sunday, according to the latest figures supplied by the Health Ministry. Once again, the majority of indicators were at low levels, while there were continuing problems with the notification of the figures from the Catalonia region.

There were 246 new infections reported on Sunday and 70 deaths, hospitalisations were at 86, and new intensive care unit (ICU) admissions were at three – all of which were the lowest seen since March, at the outset of the crisis.

That said, figures reported on Sundays and Mondays should always be regarded with some caution, given that there has tends to be underreporting. Data from Catalonia is yet to be included by the Health Ministry in the figures for hospitalizations and ICU admissions.

The figures reported today registered a slight increase in the number of daily coronavirus-related deaths, which rose to 70 after three days at around the 50-mark.