Spain has added a further 48 deaths this Thursday from covid-19, which is a severe drop compared to yesterday’s 95, and the lowest figure seen in the country since 16 March when just 22 deaths were recorded, according to the latest data published by the Ministry of Health this Thursday evening. The number of deaths since the start of the pandemic is now 27,940.

There have also been a further 344 new cases, also a decrease compared to Wednesday, when 416 positives were registered. The total number of infected remains at 233,037. This Thursday, 20 new intensive care admissions were reported, as well as 140 new hospitalisations.

Of the 48 deaths, four have been registered in Andalusia, one in Aragon, three in Asturias, six in Castilla-La Mancha, five in Valencia, one in Extremadura, one in Galicia, 19 in Madrid, one in Murcia, three in Navarra, three in the Basque Country and one in La Rioja. 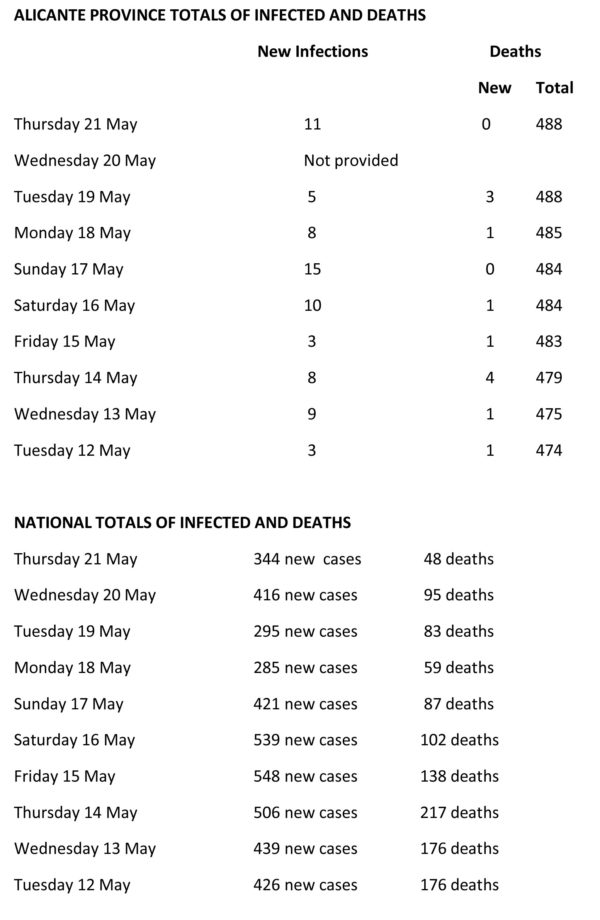 In the Valencia community a total of 38 new cases were recorded in the last 24 hours of which 7 have been detected in Castellón, 11 in Alicante and more than half of them, 20 in Valencia

The total of accumulated positive cases detected by PCR since the start of the pandemic is 10,987. Regarding discharges, in the last 24 hours there have been 167: 8 in Castellón, 48 in Alicante and 167 in Valencia.

There was only one death in the period, also recorded in the province of Valencia.

The situation in care homes is a little better with 83 senior centres recording positive cases, which is 3 less than yesterday.