NOT all Premier League clubs resumed training on May 19, in the wake of the coronavirus situation, after

League officials, medical experts and representatives from 20 clubs held talks on May 18, via video conference.

After the conference, it was announced clubs had agreed to Phase 1 of returning to training protocols.

Some players did not back the move. Watford skipper Troy Deeney did not train, due to concerns for his son’s health.

On May 20 Manchester United’s players return to training at their Carrington HQ, having undertaken coronavirus testing on May 17.

Manchester United’s Luke Shaw said on the club’s website: “We have to do our work, keep fit and it’ll be nice to be around different people and see the boys again for a bit longer.

“It’s a massive step forward to get on the same training pitch as each other.

“We’re all really excited to be getting back to some normality and we’re all going to do everything we possibly can to make sure our training is as safe as it can be.

“We had another group call when the news was confirmed to us, and you could see how excited the coaches were to be getting back.

“The players are, of course, but we’ve been able to keep busy with fitness work, while the coaches have been waiting to be able to put their sessions into action.”

Premier League chief executive Richard Masters said they expected to receive the first batch of COVID-19 test results on May 19 – and training can start to begin.

The Premier League has been mooted to resume on June 12: “I think once you know when you can start full contact training, and we’ve had a proper discussion about clubs over how much is required to create the fitness levels before they can start playing, you’re then in a position to confirm when the season start date is,” said Masters.

“We haven’t changed the start date; we have to be flexible about it. What we don’t want to do is continually to move that start date.

“So, we haven’t changed it but we need to be flexible and acknowledge we’re in a step-by-step process,” added Masters.

In a statement, the Premier League said: “This first stage has been agreed in consultation with players, managers, Premier League club doctors, independent experts and the government. 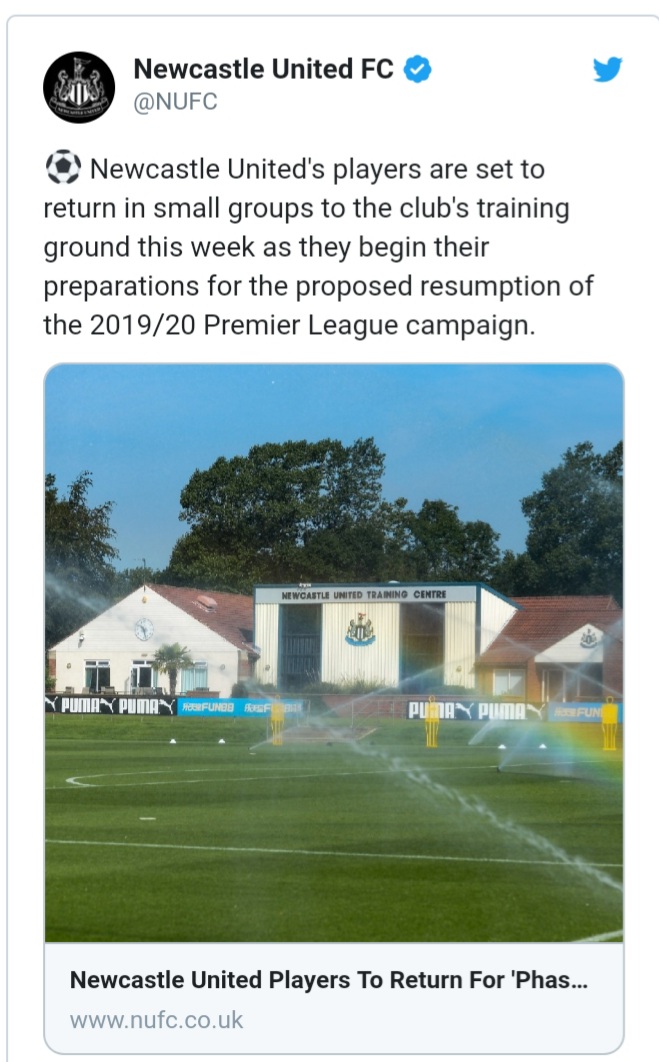 “Strict medical protocols of the highest standard will ensure everyone returns to training in the safest environment possible.

“The health and wellbeing of all participants is the Premier League’s priority, and the safe return to training is a step-by-step process.

“Full consultation will now continue with players, managers, clubs, the PFA and LMA as protocols for full-contact training are developed.”

Premier League medical advisor Dr Mark Gillett said: “The advice we are getting from government is that if you are going to isolate you have to do it for 14 days.

“So you will need to be in a hotel environment for 14 days to make it truly effective.

“Now that is something we are going to need to think about and consult widely with players, managers, clubs, LMA, PFA – all the stakeholders as we move through into that phase.

“It’s certainly something that will be discussed. And ultimately when we get into Phase 3 in particular, we will make a decision on that and it will be one that everyone is happy.”

Along with disinfecting all training equipment, including balls at training grounds, players are aware of the strict legislation which will be in place under Phase 1 training – including no tackling, spitting and maintaining social distancing from everyone, at all times.