Premier league hopefuls Leeds Utd are just one of a number of clubs who are looking closely at Elche’s highly rated full back, 27 year old Juan Cruz.

Along with Mallorca, Valladolid, Osasuna, Real Betis and Getafe, the 4 million euro rated player has been in the form of his life for second-tier side Elche as they look to make a late push for promotion

The Spanish ace has a contract at Elche until the summer of 2021 and although the 4 million fee is an absolute bargain, should Elche gain promotion or he move to a club in La Liga, the termination clause increases to 8 million euro.

But it may be that Leeds Utd, who are currently top of the Championship with a seven-point cushion in the automatic promotion places, have the edge, as their well respected Director of Football, Victor Orta, is himself a former Elche man.

This season Cruz has played 27 league games and despite featuring as a left back he has provided seven goal assists on goal which is currently the 3rd best return for a full back in the top two divisions. 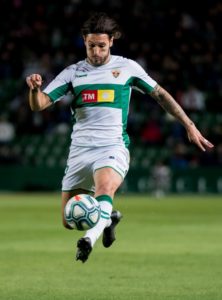 The fee would also provide welcome income to Elche who are once again experiencing financial problems.

They were scheduled to train at the Martínez Valero stadium but decided carry out their fitness programme’s at home to show their discontentment with the team’s decision not to lift the furloughs that had been put in place as a result of the coronavirus pandemic.

Now that they are back in training the players feel that their salaries should be restored to 100%, especially as the league is expected to restart.

Although they trained as normal on Tuesday their request to have their salaries restored from their current reduced rate of 70% was ignored. Like many other lower league clubs Elche used the government furlough system to reduce its labour costs during the pandemic.

Club CEO Patricia Rodríguez told Spanish local radio network COPE she was surprised with the players’ decision because the club had already made them an offer to adjust their salaries.

She said players are not being required to work overtime under the furlough conditions.

“Even though they are going to the stadium, they are only training for about 45 minutes, which is within the reduction stipulated by the furlough,” she said.

Rodríguez added that when players start working for longer periods, the furlough conditions will be adjusted. She said the coaching staff had already requested changes in their furloughs because they are having to put in more time, as they are now practicing at different periods during the day.

“This is something that we all need to discuss,” she said. “The players already had an offer on the table before this happened.”

Elche was sixth in the 22-team second-division standings when the competition was suspended after 31 matches and with just 11 matches remaining they currently occupy the final playoff spot, 4 points ahead of CD Mirandes, the team below.

The Spanish league’s first and second divisions are expected to resume on June 12.