A further 143 people died in Spain from coronavirus in the last 24 hours, the lowest recorded since 18 March, taking the official death toll to 26,621 deaths, although that does not include the total figures for the Community of Madrid and Catalonia. The figure is slightly below that of yesterday (179) although the number of new cases is marginally higher at 621 as opposed to 604 yesterday.

A further 2,214 people preciously suffering from the virus, were discharged from hospital across the country.

The age group where the most deaths have been registered continues to be that of the 70’s with more than 80% of deaths, both in men and women. The number of cured patients is 136,166 and that of infected medical staff since the start of the pandemic, 48,046.

Of the 621 new infections today – 17 more than yesterday – 151 are in Catalonia and 110 in Castilla y León. However, the Ministry of Health said that the Community of Madrid has not yet updated its data and only reports 73.

There have been 465 new hospitalisations, of which 123 are in Madrid and 97 in Catalonia.

However the usual improvement in the data on weekends should be taken into account, due in part to work stoppage by many people who would normally collect the data.

51% of the Spanish population will move into phase 1 of the de-escalation plan on Monday. Exceptions will be the Community of Madrid, Albacete, Ciudad Real and Toledo, Malaga and Granada and various sanitary areas of the three provinces of the Valencian Community, including Elche, Santa Pola and Alicante.

However not all conditions to be applied have yet been published with more to be announced during the course of the day. 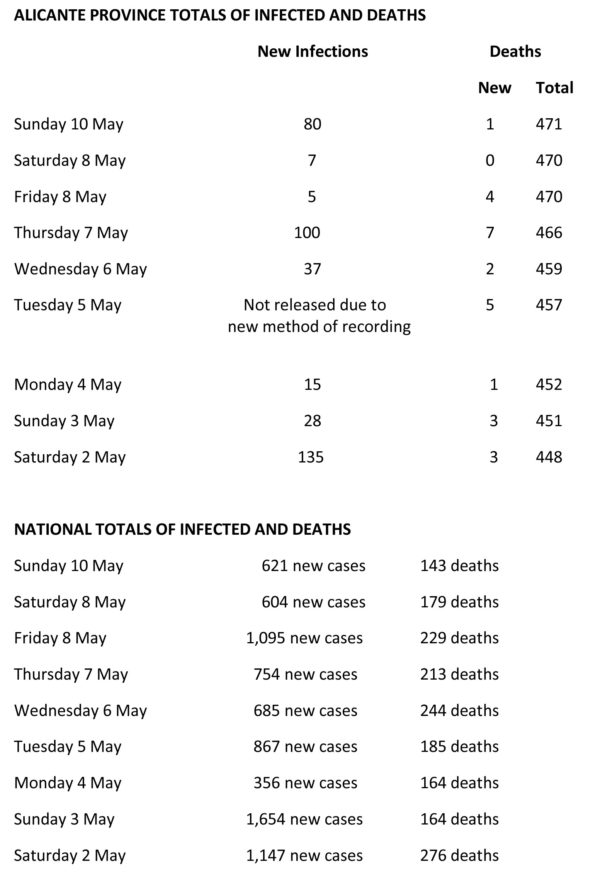 The Valencian Community has registered a total of 52 new cases of Covid-19 confirmed through PCR and 10 deaths in the last twenty-four hours (eight confirmed by PCR and two with an epidemiological link), as well as 65 discharges from hospital.

As reported by the Ministry of Health, since the start of the pandemic a total of 10,713 infections have been confirmed through PCR tests, while the total number of deaths numbers 1,338 with 8,861 people cured.

The number of people hospitalised continues to decrease, which is now 480 (eight less than on Saturday) while ICU entrants, currently stands at 87 people (five less than Saturday).

To date there have been a total of 1,338 deaths in the Valencian Community: 201 in the province of Castellón, 471 in Alicante and 666 in that of Valencia. There are ten more deaths since the last update (eight confirmed by PCR and two with an epidemiological link).