There has been a slight increase in the number of deaths and new cases from COVID-19 announced by the government on Tuesday morning.

A further 185 deaths and 867 new cases were announced by the director of the Centre for Health Alerts who had already pointed out that there could be a readjustment, as a result of the effect of lower recordings over the weekend.

This Tuesday, Asturias, Ceuta and Melilla are the only regions that have not registered any deaths.

Despite the downward trend in the evolution of the pandemic, Fernando Simón insisted that “there is still a risk of regrowth” and asked that everyone continues with stringent hygienic and sanitary measures. 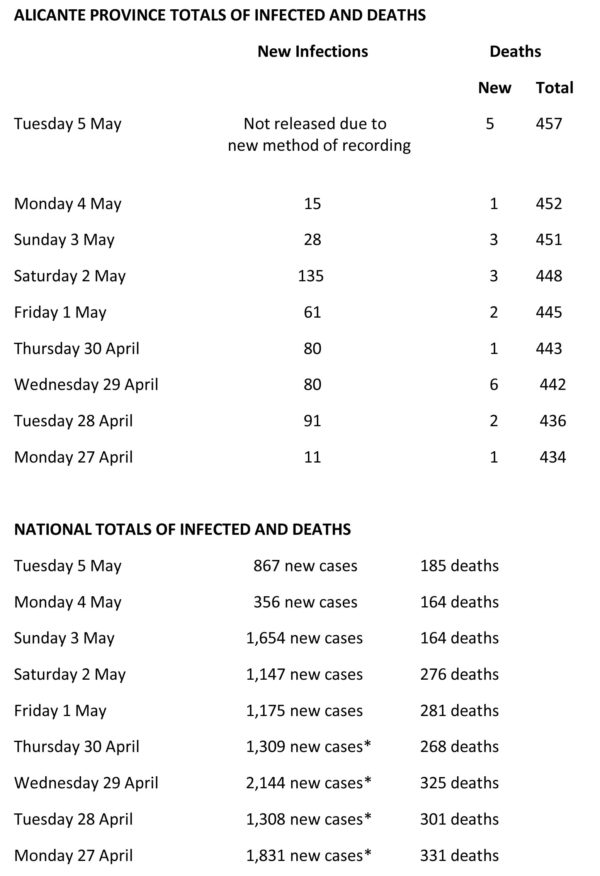 However 60 more people have been cured and discharged from hospitals throughout the province. Six out of ten people are now cured according to data provided by the minister.

Those hospitalised for coronavirus decreased by 8 compared to the previous day, 164 remain in hospital, 40 of them remain in the ICU, 3 fewer than yesterday.

In the Valencian Community there have been another 69 infections in the last 24 hours, bringing the total number of cases to 10,500.

This is the figure following the introduction of a new counting system, so that from now, only the positives confirmed through PCR tests are recorded, based on the new criteria issued by the Ministry of Health to standardise the control of the deconfining process, as announced on Tuesday by the Community Minister of Health, Ana Barceló, in her appearance on Tuesday.

She insisted that “this type of test is the one that offers maximum reliability, instead of the inaccuracy of rapid tests, which must then be confirmed with PCR, as we have been saying from the beginning.”

According to this new method, the total number of infections by province is 1,435 in Castellón; 3,677 in Alicante and 5,388 in Valencia.

On this occasion, the Minister of Health has not disclosed the numbers of new positives confirmed by PCR in its breakdown by province.

In addition, there have been 149 new discharges, so that the total number of recoveries since the start of the pandemic now amounts to 7,655. Among those registered in the last day, 34 correspond to patients from the province of Castellón, 60 to Alicante and 55 to Valencia.