The Valencian Community has recorded the start of the new week with the lowest number of hospital admissions for people with coronavirus. In the last 24 hours, just 11 people have required admission to Valencian hospitals, a figure that maintains the downward trend and representing only 8% of all confirmed cases today.

There have now been a total of 7,506 discharges of people with coronavirus (59 since the update on Sunday), which means that 6 out of 10 of those diagnosed have now been cured of the disease. By provinces: 1,006 in Castellón, 2,801 in Alicante and 3,699 in Valencia.

In addition, 148 new positive cases have been recorded, bringing the total number of positives to 12,834 since the pandemic began. Of these, 14 are in the province of Castellón, 15 in Alicante and 119 in Valencia. Currently, 4,049 cases are active, 1 in 3 of all diagnosed cases.

To date there have been a total of 1,279 deaths in the Valencian Community: 195 in the province of Castellón, 452 in Alicante and 632 in that of Valencia. 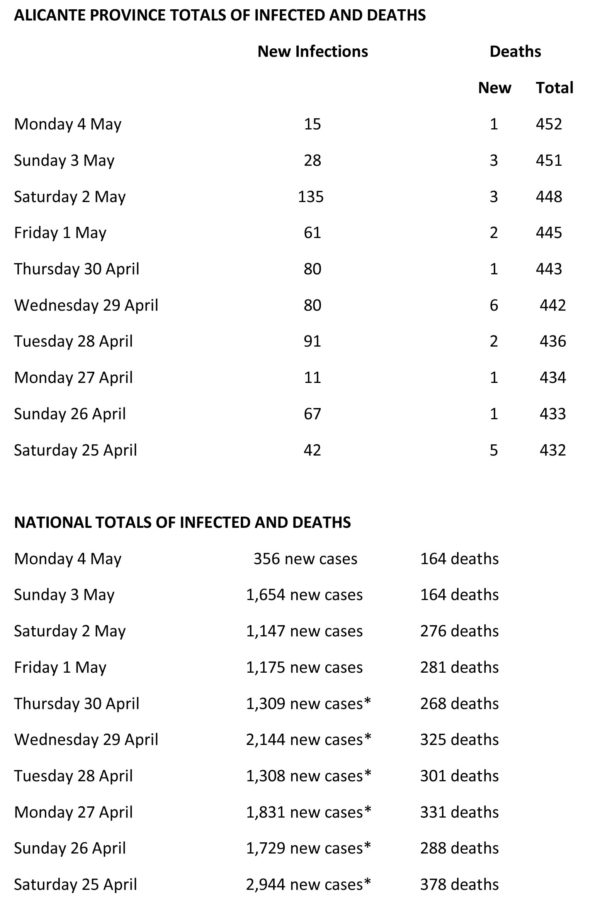 Across the country Spain registered just 164 deaths with covid-19 for the second consecutive day. And the news regarding new cases was even better with just 356 new cases recorded, a fall of almost 1,300 from yesterday.

“The data is good, but you have to be careful after a long weekend [there is less notification due to the closure of many government offices, so on Monday not all the data for Sunday is known]. We have to be clear that the risk of regrowth is not eliminated,“ said Fernando Simón, director of the Centre for Coordination of Health Emergencies.

There has also been movement with regard to the relaxation of lockdown across the country with the opening of small shops and hairdressers by appointment and restaurants that sell takeaway food within phase 0 of the de-escalation.

The use of masks is mandatory for users of bus, rail, air and sea transport.

The islands of La Gomera, El Hierro, La Graciosa and Formentera have moved directly to phase 1 with groups of up to 10 people now allowed to meet.

However there could be trouble ahead for the Prime Minister as the leader of the main PP opposition party, Pablo Casada, said on Onda Cero that “The state of alarm extended from this week does not make any sense.”  It is not knows, at this stage whether he will support the government vote on Wednesday.

Worldwide, more than 3.5 million people have been infected and more than 247,000 have died, according to Johns Hopkins University.