The coronavirus has claimed a further 164 lives and registered 1,654 new cases in Spain during the last 24 hours.

This is the lowest number of recorded deaths in a month and a half, since 18 March when the figure declared was 107.

The total number of deaths is now 25,264, but that figure excludes from the calculation those deceased from the Communities of Madrid and Catalonia, which report deaths by a different counting system and which would then yield a much higher number.

A total of 118,902 patients have now overcome the disease, with a further 1,654 cured since yesterday.

The gradual reduction in deaths seems to be fairly consistent with the figures recorded at just over 500 fatalities one week, down to 400 the next, 300 and then 200.  However it is too early to say whether this new figure in the 100’s is here to stay or if it is simply a product of the underreporting that usually occurs on weekends.

What tends to happen following a reduction on Sundays and Mondays, there has been an increase on Tuesday, when all the data received on Monday, has brought the figures up to date, but, encouragingly, this increase did not take place last Tuesday.

There are six communities, in addition to Ceuta and Melilla that have reported fewer than 10 cases: Asturias, the Balearic Islands, Cantabria, the Canary Islands, Murcia and La Rioja. Only Catalonia and Castilla y León exceed one hundred.

Madrid could be another but the region is always late to report so it is not yet reflected in the statistics.

New hospitalisations, probably the most solid data to measure the progress of the covid-19 virus, have been 547, the lowest number since the state of alarm was decreed. Eight communities, in addition to the autonomous cities, had less than a dozen. 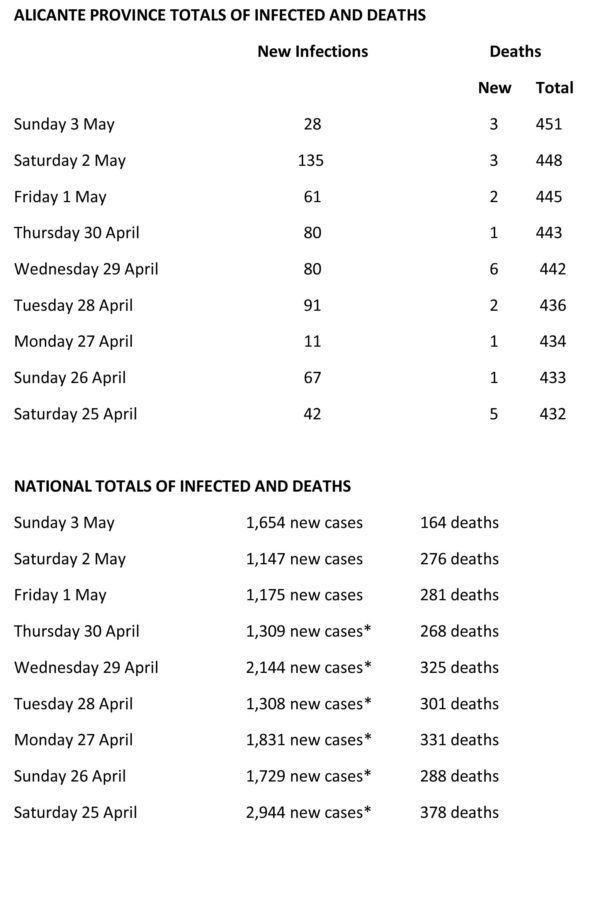 The Valencian Community has registered a total of 172 new cases of coronavirus, 8 more deaths in the last 24 hours along with 160 hospital discharges, since the most recent update on Saturday. The total number of positives is now 12,686, with 1,274 deaths and 7,447 discharges since the start of the pandemic.

The Ministry of Health confirmed 172 new positive cases – compared to the 305 new positives registered on Friday – bringing the total number to 12,686 since the pandemic began.