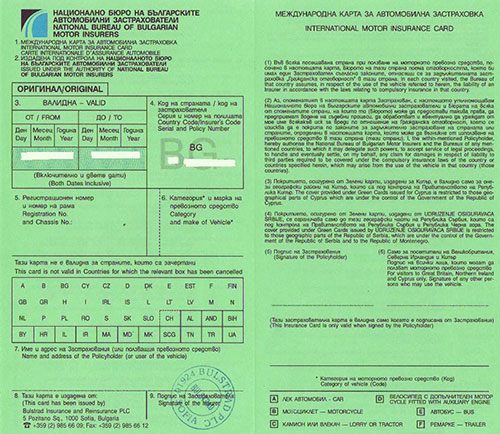 When an insured vehicle travels to certain countries, the owner is responsible for ensuring that a “green card” is issued by the insuring company, however, from next year, that document when issued in Spain will no longer be green.

As leading ex-pat insurer Ibex Insurance explained, after many years of working on the proposal initiated by Ofesauto, the ‘Consejo de Oficinas Nacionales’ (in charge of regulating the format and structure of the Green Card for the 48 countries that form part of it), the association has allowed the document to be generated in a pdf format so that it can be sent by email and printed in black and white and in just one side of an A4 sheet of paper.

This is just one step forward so that checks can be carried out internationally for any vehicle of any nationality digitally instead of physically. Right now, for countries that are not part of the European Union (the nearest to Spain would be Morocco), the paper document will still be necessary to confirm that a Spanish vehicle is insured. But at least, it will not be mandatory for the document to be printed in green any longer as there is no requirement that it must be printed by the insurance company. For example, the policyholder will be able to print the document the same way as they print a Boarding Pass.

In view of this possibility, Ofesauto, as the responsible body, has developed a web platform to assist in the issuing of Green Cards, which will be fully operational as of April 1, 2021.

This decision will mean significant cost savings, both financial and administrative, for all entities, since currently when they decide to issue a ‘Green Card’ they have to physically print the document in a certain format and colour, and physically send it by post.

In addition, from the point of view of the management of claims occurred in those countries where the ‘Green Card’ is necessary, and especially with regard to both foreign security forces and victims, Ofesauto will have a single central registry to consult in real time which entity has issued a certain ‘Green Card’.

With this step, “the Spanish insurance sector once again acts as an example of cohesion and common collaboration in the development of solutions that benefit not only all entities, but society as a whole and victims of accidents in particular.”

At the moment, nothing changes, as it will be from April 1 of next year when the use of platform is mandatory.