The Valencian Community has registered a further 305 new cases of coronavirus and thirteen deaths in the last twenty-four hours, while the number of hospital admissions has decreased by 42% since April 18, There have also been a total of 7,287 discharges .

The total of positive cases in the community is now 12,514, of which 3,961 cases are currently active.

The number of deaths in the last 24 hours rises to 13, bringing the total number of deaths to 1,266: 193 in the province of Castellón, 448 in Alicante —that is, three new deaths compared to the previous day – and 625 in that of Valencia.

Despite this, Health has reported that ICU admissions have halved in the last two weeks, from 238 on April 18 to the current 120.

There has also been a 42% reduction in the number of hospitalised during that period, from 1,095 people to the current figure of 638.

Update on the situation in residences

Residents who have tested positive: 2,047

Residents who have died: 471 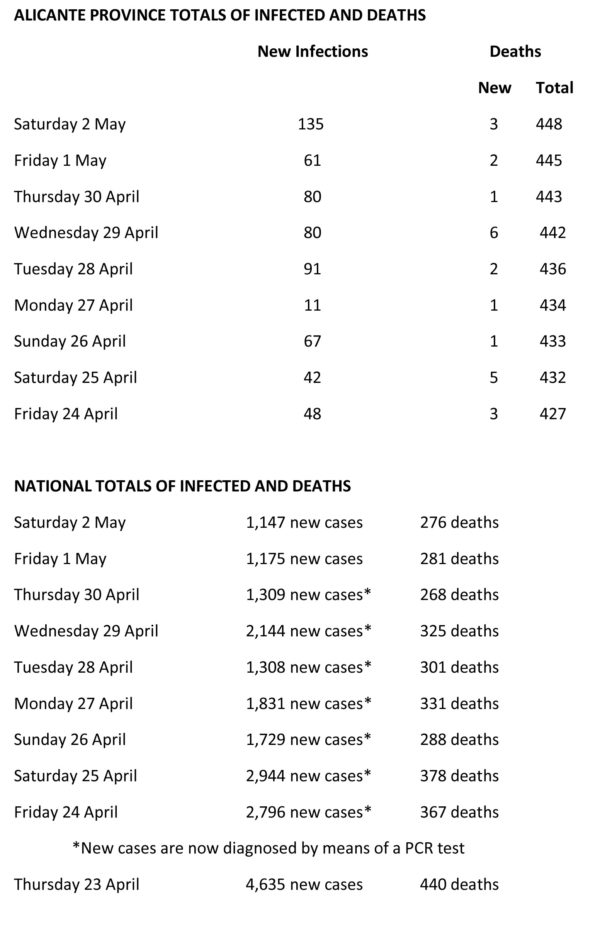 The Communities of Madrid and Catalonia continue to lead the fatality rate. The two regions added 146 new deaths this Saturday, more than half of the daily total, 276. They are followed by Castilla-La Mancha (35), Castilla y León (18), Andalusia (15) and the Valencian Community (13). One community, the Region of Murcia, had no deaths at all, in Cantabria and La Rioja there were one and in Galicia, two deaths.

A pattern of the deaths by age group: those over 70 years of age continue to account for 80% of deaths in both men and women. Most with previous pathologies such as hypertension, diabetes or lung problems.

In the United Kingdom, the total death toll reached 27,510 people this Saturday. This is a substantial increase for the third consecutive day, 739 more deaths in 24 hours, is because the authorities now compute the non-hospitalised deaths.

Health Officials in Ireland have confirmed a further 34 people diagnosed with Covid-19 have died in Ireland, and there are 221 new cases of the disease.

There have now been 1,265 Covid-19 related deaths in Ireland and a total of 20,833 confirmed cases in the country since the start of the outbreak.

Irish Lotto Results, Plus 1 and Plus 2, Lottery Winning Raffle Numbers for Wednesday, 12 May, 2021

What Are the Rules of Playing at Foreign Online Casinos?