The coronavirus pandemic maintains its fluctuating trend with another reduction in the number of new cases in the Valencian Community, following the increase registered on Tuesday.

Barceló announced a further 176 recoveries: 43 in Castellón, 86 in Alicante and 47 in Valencia.

Of the new infections, 23 are in the province of Castellón, 80 in Alicante and 55 in Valencia. In the case of the province of Alicante, the figure is 11 fewer than Tuesday.

However, the death rates of patients have once again increased with 19 more deaths (7 more than those reported on Tuesday).

There have now been a total of 1,225 in the Community as a whole (1,206 up to Tuesday) . Of these new deaths, 2 are patients in the province of Castellón, 6 in Alicante (4 more than on the previous day) and 11 in Valencia. The number of deaths in the province of Alicante now amounts to 442. Of those 19 new deaths, 12 correspond to people who had contracted the disease in nursing homes.

Barceló confirmed that so far 138,314 diagnostic tests have been carried out: 107,969 PCR and more than 4,000 rapid tests. She also updated the situation of nursing homes where there are currently positive cases in 84 centres, five fewer than Tuesday. In addition, 29 residences are under active surveillance of the Ministry of Health, two fewer than on the previous day: 8 in the province of Castellón, 8 in the province of Alicante and 13 in the province of Valencia.

Barceló has focused much of the press conference on explaining the phases for the de-escalation process approved by the government on Tuesday more details of which will become apparent during the week.

She said that she is going to propose to the ministry that the de-escalation be done in the Valencian Community by health departments and not by provinces, as originally envisaged by the Government. 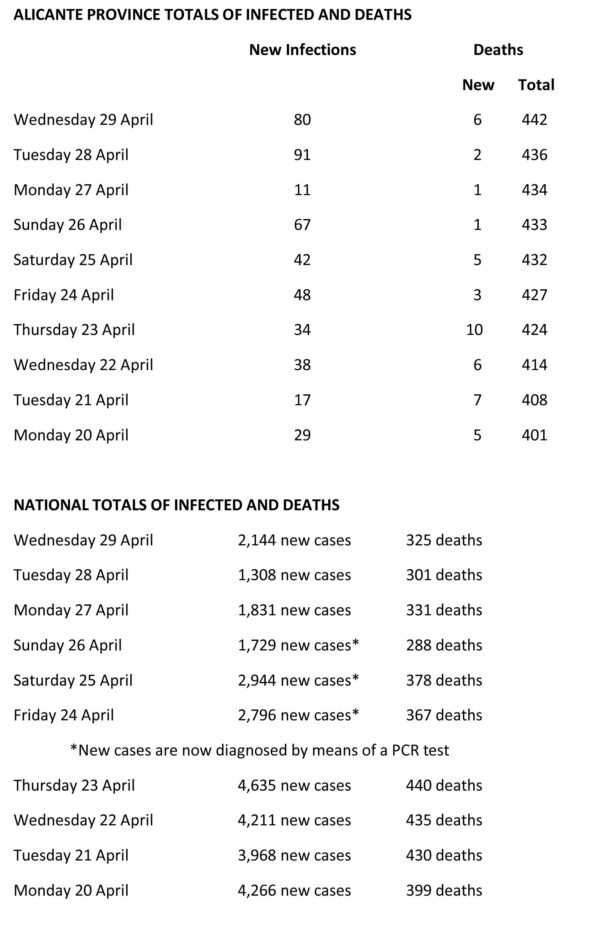 There is now a total of 34,418 dead in Spain, 325 in 24 hours. The Ministry of Health, however, only records 24,275 deaths, since it does not collect complete data from the Community of Madrid and Catalonia.

The figure of 325 is a slight rise from Tuesday, when the number of overnight fatalities was 301. But after reaching a peak of 950 fatalities at the beginning of the month, the number of daily coronavirus-related deaths has shown a slow descent.

There have been 2,144 new infections, compared to yesterday’s figure of 1,308, which was the lowest number recorded, in both absolute and relative terms, since the declaration of the state of alarm on March 14.

The de-escalation plan announced on Tuesday evening by the Prime Ministry continues to attract criticism during a question and answer session in Spain’s lower house of parliament, the Congress of Deputies.

The PP deputy leader, Teodoro García Egea, accused Sánchez of being “directionless” and spending “more than an hour in declaring uncertainties.” “There is no plan,” he wrote on Twitter. There was also a backlash from nationalist parties with the premier of Catalonia, Quim Torra, calling the plan a “serious error.”