The Minister of Health, Ana Barceló, has confirmed this Friday morning a that during the last 24 hours the Valencian Community has recorded a further 171 new cases of coronavirus, 16 deaths and 421 discharges.

The data on discharges is particularly encouraging now taking the figure to 5,809 people who have been cured of the total of 10,906 cases registered since the outbreak began.

The Minister said that these discharges represent 53.3% of total cases, that is, more than half of those infected have now been cured in the Community.

Barceló explained that there are currently 3,949 cases active, 36.2% of the total. The total number of deaths since the pandemic broke out is 1,148, 16 of them in the last 24 hours of which 12 were in nursing homes.

According to the latest data update, of the 171 new cases of covid-19, 50 of them have been medical staff, 34 from nursing home residents and 23 from workers in these homes.

Of the 16 deaths registered since yesterday, 9 have been in Valencia, 4 in Castellón and 3 in Alicante. In addition, in the last hours 50 health professionals have tested positive for covid-19 and another 49 have been discharged.

Nursing homes are still the hardest hit and in the last 24 hours there have been 34 new infections among the elderly of these homes as well as 23 cases among workers. Right now there are cases in 96 residences, three more than yesterday.

The Ministry of Health currently has 33 nursing homes under its direct control given the seriousness of their situations: 15 in Valencia, 9 in Castellón and 9 in Valencia.

The Minister also stated that more than 114,500 tests have been carried out in the Valencian Community since the pandemic broke out of which there have been 18,098 rapid tests and 96,406 PCR tests.

The Ministry of Health said that across Spain there is now a total 202,990 of positive cases, with 2,796 recorded more than yesterday.

For the first time, the number of people cured is higher than the daily increase in cases with 3,105 new discharges. There are now 92,355 patients who have recovered from covid-19, which out of the total number of infections represents 45% .

With 367 new deaths, the total number of deaths since the pandemic began amounts to 22,524. 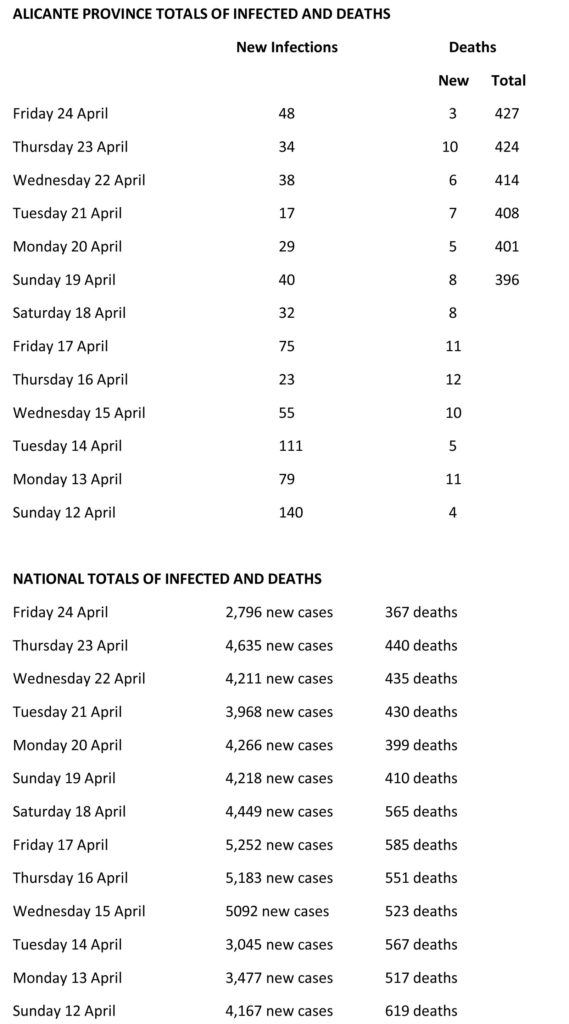