An independent study by the Deep Knowledge Group (DKG) international research centre has analysed the response of each country to the coronavirus pandemic based on a total of 24 criteria and the conclusions are devastating for the Government of Pedro Sánchez listed as the worst country in Europe in it’s management of the pandemic.

The arguments that the Sánchez government incessantly repeats about its control over the virus state that Spain acted quickly in the face of the pandemic, that it did so forcefully and that the Spanish response has been praised worldwide. But every day, studies continue to appear that expose many of the claims made by the Spanish Government and conclude exactly the opposite.

One of the most recent has been carried out by ‘ Deep Knowledge Group’, a department of the venture capital firm DKV headquartered in Hong Kong with a subsidiary in London that specialises in the analysis of health-related contingencies.

This study centre has analysed the situation and the response to the pandemic in 150 countries, and based on the results, it has prepared various ranking charts on the management of the different governments and the safety index for the residents of each country. In the Eurozone, Spain is in last place.

The worst in the Eurozone

Spain is ranked 33 out of a total of 33 countries, at the very bottom of the league table, with 518.85 points, in a ranking led by Germany, Switzerland, Austria, Hungary and Denmark . Sitting just ahead of Spain in ascending order are Italy, San Marino, United Kingdom, Andorra and Romania. The last ten countries in the ranking are all labelled in the “low level” category of security.

Ranking of Eurozone countries according to their response to the coronavirus.

The study analyses a total of 72 metrics based on official data which has been obtained from the World Health Organization (WHO), Johns Hopkins University in Baltimore and the Centre for Disease Control (CDC) in the United States.

To categorize Spain as the most ineffective country in the face of the pandemic in all of Europe, analysts (as shown in their methodology) have used a total of 24 factors included in four groups: quarantine effectiveness, government management efficiency, virus monitoring and detection and, lastly, the availability of sanitary equipment to deal with the pandemic. 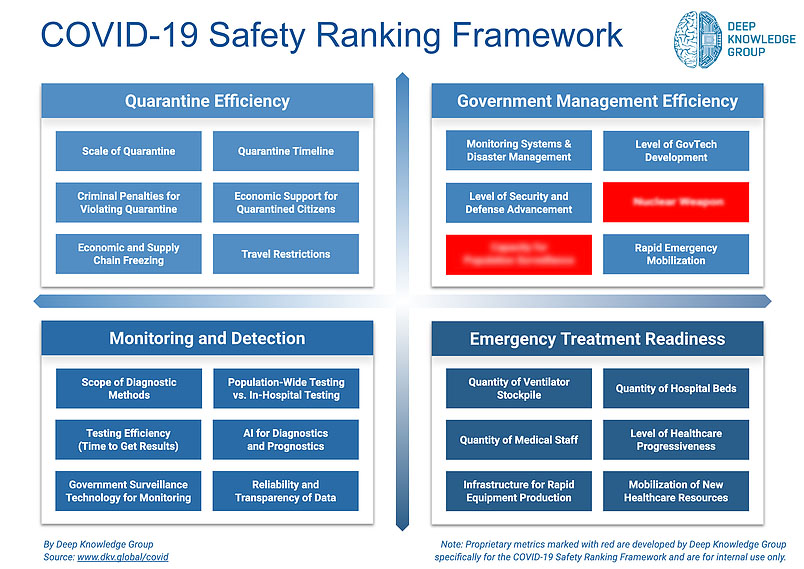 In the first quadrant, that of quarantine efficiency, response times, the severity of the measures, the penalties for violating confinement , economic support for citizens, the freezing of the economy and restrictions on travel. In the case of the efficiency of the Government’s management, the criteria used are areas such as rapid mobilisation and decision-making around the emergency.

Technical criteria of sanitary quality are also analysed, such as the number of ventilators available, the number of hospital beds, the mobilisation of sanitary resources, the quantity of sanitary personnel and the infrastructure to produce medical equipment.

Regarding detection, aspects such as access to diagnostic tests, their effectiveness (it is worth remembering there were 640,000 bought from China that had only 30% sensitivity ), their speed, the use of artificial intelligence in diagnosis, and the transparency and accuracy of the data provided by the Government.

Another study, from the University of Oxford, also rates very poorly the management of Spain at the start of the outbreak, considered to be the most strategic and vital phase, those first few days, resulting in the fact that today Spain is the country with the most deaths per million inhabitants.

Oxford University, which Sánchez himself cited in Congress to praise his management, actually rated the Spanish government poorly in terms of its speed of action. Rapid response has been openly cited as the essential key to controlling the pandemic where countries like Afghanistan, Syria, Iraq and Papua New Guinea did better than Sánchez, according to the Oxford data revealed in Spain by the National daily newspaper OKDIARIO.