It’s been a wet April across the Iberian Peninsula, and that trend will continue through this weekend as two more storm systems take aim at southwestern Europe.

The national weather service for Orihuela, Spain is reporting Sunday 19th April to be the wettest day in the coming week with around 2.30mm (or 0.1 inches) of rainfall. Make sure to carry an umbrella if you are out and about.

The first storm will skirt from south to north along the western Iberian coast toward the Bay of Biscay into Friday. 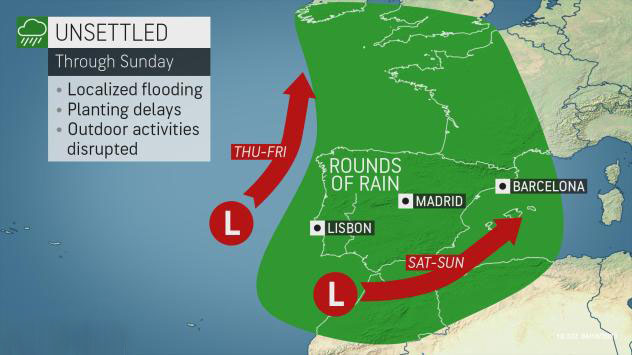 The heavier rain and delays will shift to eastern Spain later in the weekend as another area of low pressure moves from northern Africa into the western Mediterranean.

Areas outside of the heaviest rain will still have cool and showery weather to contend with.

“Even while the steadiest rain focused on western Spain and Portugal Thursday into Thursday night, central and eastern Spain will still have damp and showery weather to contend with and vice versa once the heavier rain reaches western Spain during the weekend,” AccuWeather Meteorologist Rob Richards said.