The coronavirus pandemic has left eleven more dead in the province of Alicante and 27 in the Valencian Community in the last 24 hours. The vast majority of these deaths 23, correspond to people who were living nursing homes.

However there is another positive outlook in the number of hospitalisations and admissions to Intensive Care Units, which continue to drop. There are now 322 people in the province in hospitals and 94 of them in critical care units.

The total number of people hospitalised in the whole community is 1,173 (74 less than yesterday), of which 252 are in the ICU (22 less than on Wednesday). Likewise, a further 94 health professionals have been discharged, while another 37 have been newly infected.

Health has reported this Friday that the increase in infections from coronavirus remains at 3% with the total number of registered cases now 188,068, which is 5,252 more cases than this Thursday.

However the number of deaths has again risen with this mornings data recording a further 585 deaths taking the total to 19,478.

However, yesterday the deaths were at 19,130, but the figures are now being collected slightly differently so, without the adjustment they are making, the increase would be 348 .

The Minister of Health, Salvador Illa said that between 40,000 and 47,000 tests are being carried out daily. 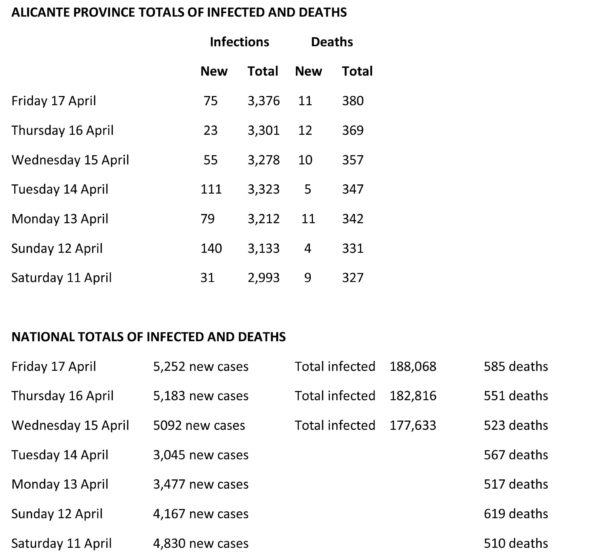