Shocking images have appeared of stretchers with dead bodies on the streets of Brooklyn, New York, in the face of the collapse and lack of space in the city’s hospitals and morgues, caused by COVID. 19.

As the victims of the coronavirus accumulate, bodies have to be temporarily stored in trucks which are used as mobile morgues. The transfer of the bodies is being carried out in broad daylight and in full view of the general public while several stretchers were waiting on the side of the street for transport.

New York remains the epicenter of the US coronavirus outbreak and according to Governor Andrew Cuomo the worst is yet to come. Thus, the medical staff and the authorities continue to work around the clock as they wait for a “tsunami” of infections.

Among the infected New Yorkers, about 9,500 are hospitalised and 2,000 are in intensive care.

On Monday the Mayor of New York, Bill De Blasio, welcomed the arrival of the hospital ship ‘Comfort’ at Pier 90 in Manhattan announcing that the city will immediately have ” 750 additional beds to relieve pressure on the health system” and a further 1,200 people to help fight the pandemic among it’s sailors and medical personnel . 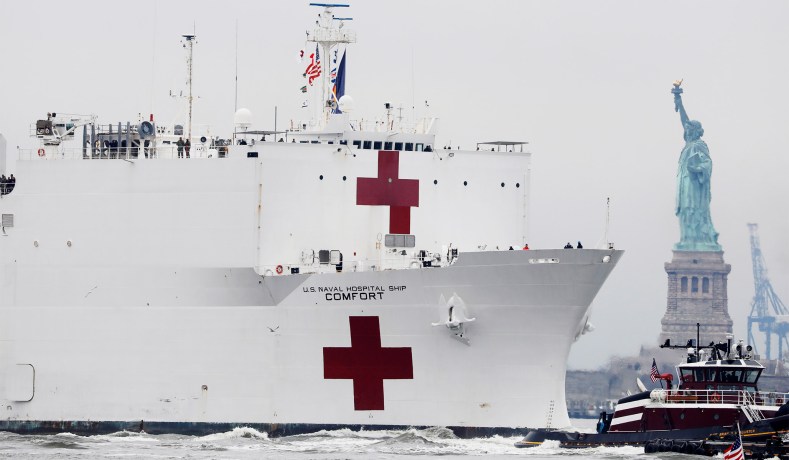 The ship is also equipped with 12 operating rooms, a medical laboratory, a pharmacy and digital radiology, as well as two facilities for the production of oxygen and a platform for helicopter take-off and landing.

Meanwhile President Trump has now said that saving lives is his main priority.

At his daily press conference on Monday, and given the critical situation in the United States, Trump said that he has put aside his objective of reactivating the economy as soon as possible. “Well, (confinement) is very bad for the economy, but the economy is number 2 on my list. First, I want to save many lives,” he told the assembled press corps.

His original goal was for churches to be “full” on April 12, Easter Sunday, but he has since extended federal measures of social distancing until April 30.

“By vigorously following these guidelines, we could save more than a million lives,” he added.