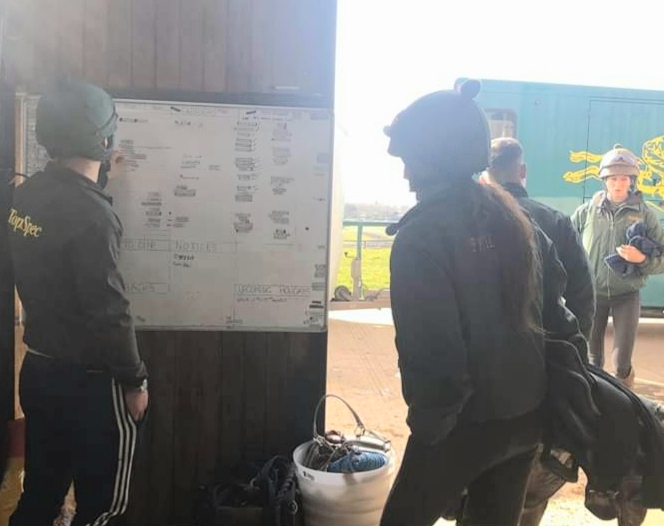 Horseracing has been suspended – due to the coronavirus pandemic – following a move by the BHA to shutdown until May, at the earliest.

It is deemed jockeys will be hit hard – as will thousands of other professionals in the country – with financial worries over when racing will return.

Freelance jockey Sean Quinlan has aired his views, saying he is worried, and living off wages earned in the winter months.

Quinlan is scheduled to get married in September, and has been left pondering as to whether the wedding will go ahead.

Jockeys sidelined through injury are covered by the Professional Riders Insurance Scheme (Pris).

Leading top jockeys can earn a good living – but many jockeys struggle to get rides on a daily basis.

Quinlan’s jump jockey colleague Adam Wedge points out that jockeys are all self-employed – thus stating there is no income for some following the imposed racing ban.

Wedge says he is in a lucky position, in riding for trainer Evan Williams, who is to continue paying a wage while working (riding out).

The Randox Health Aintree Grand National has been cancelled on April 4, in the six-week suspension, along with the Scottish Grand National meeting at Ayr.

Many trainers have dozens of staff employed and they have been told – in some cases – they will continue to get paid. Others face redundancy.

Ayr has seen the cancellation of the two day Scottish National meeting, along with first two Flat racing fixtures.

Managing Director David Brown said despite it being a devastating blow to Ayr racecourse, the safety and health of the public has to take priority.

The Coral Scottish Grand National was a sell-out, with 19,000 spectators set to attend.

The BHA had a meeting with racecourse executives and horsemen on March 18, to discus all financial options for British racing during the coronavirus shutdown.

A joint statement said: “We know these are anxious times for everyone in our industry.

“While everyone is worrying about the health of their families, we now face this huge disruption.

“We know people are worried about their jobs and the survival of their businesses.

“We are working round-the-clock to present the most powerful case we can to the UK and devolved governments.”

Trainer Philip Kirby, based at Green Oaks Farm stables in Richmond, North Yorkshire, are amongst those faced with the cancellation of meetings, including the Aintree Grand National, with Aintree meeting entries, Top Ville Ben and Lady Buttons.

Racing has suffered from foot and mouth, bad weather and the equine flu, in recent times.

On March 18 the Government pledged loans worth £330 billion to help businesses through the crisis.

The support package announced by the Government is helping racing’s cause.

The post Racing suspended due to coronavirus pandemic appeared first on Horse Racing News and Tips.