Ours is a hospitable home. This is no more than adhering to an age-old tradition in Ireland of making people welcome and putting them up for the night if needs be. Mrs Youcantbeserious and I have guested people from Canada and America – some of whom we didn’t even know beforehand.

This reminds me that my brother owes me a lot of money on account of my kind heart. Fehin had a business in Canada, at a time when I owned a bar in Mullingar. When Fehin met somebody who told him they were heading for Ireland, he put his hand in his pocket, (you thought I was going to say he gave them money?) took out a business card and wrote on the back of it, ‘entitles bearer to one free pint’ in MY bar! What could I do?

After opening Paddy’s Point in 1999, we naturally made quite a few Spanish friends. They were all great people and several did come and stay with us in Ireland: as did also many Irish and British friends we made there. It was always particularly pleasurable when former staff members came to see us.

Telling you the above is solely to set the scene to complain about a Spanish visitor we had last week … someone whom I never wish to see again. Firstly, he was not invited, gate-crashed our home and even after that, he overstated his welcome by a further two days. He was totally out of control and the first trouble he caused was to have his plane diverted from Dublin to Belfast. From there, he left a total trail of destruction in his wake.

The guy’s name was Jorge. He got on the wrong side of my neighbours as well. I was the only one around who could spell and pronounce Jorge’s name. This is because I met so many nice Jorges during my years in Spain. This guy was not one of them.

Jorge’s full name (so that you might be able to avoid him if he calls) is Jorge Tormenta – or ‘Jorge Storm’ in English. The correct translation is ‘Storm Jorge.’ 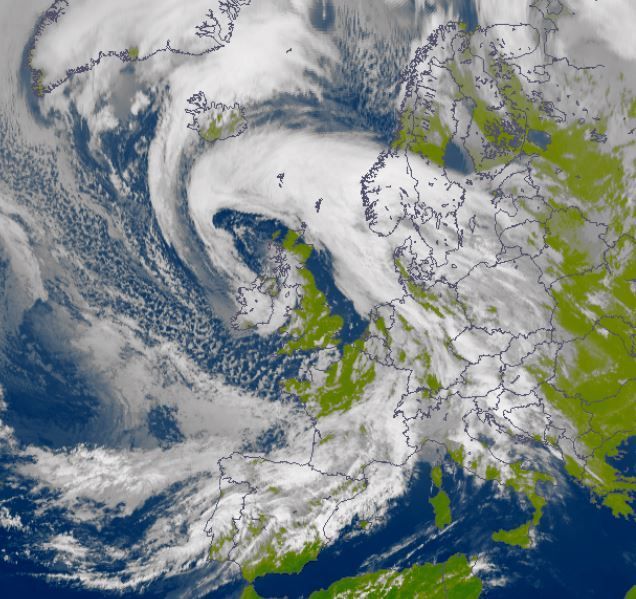 When Jorge could think of nothing better to amuse himself with; he kicked our bins around the yard, opened a field gate to let the cattle where they shouldn’t be, knocked two old tree – which were just standing the, minding their own business, and after he marooned a lady from down the road at her daughter’s in Dublin, he took her clothes line with all her undies, and made a flag-pole from the telephone pole outside my house.

Storm Jorge blew winds of nearly a hundred miles an hour, lashed us with rain, sleet and snow and flooded most of the country. There is an actual video, showing the Spanish invader turning over a massive truck on the N59 in County Galway.

We wouldn’t have known who Jorge Tormenta was only for he was outed by the Spanish Met Office. Thanks for nothing, lads …!

This column believes that the Spanish are getting their own back for what happened here in 1588. King Philip sent us the Spanish Armada to help drive out the English. The ships anchored off Kilrush, in County Clare, as a dreadful storm blew and blew. The tempest raged for days and the sailors were hungry – and I suppose you might say, ‘fed-up.’

Six ships sailed away unscathed, but three vessels and their crews ran aground on the rocks at where is since known as ‘Spanish Point.’ Half drowned and malnourished, the Spaniards were in no mood for a scrap. This didn’t save the unfortunate sailors: Not only were they attacked by the English soldiers, but for whatever reason, the Irish forces turned on them as well.

Every cloud has a silver lining and so it came to pass for the Spanish buckos lucky enough to survive Spanish Point. We have to tell it like it was ‘and shame the devil’! The girls had never encountered anything as exotic as the Spaniards. The result being that the Jorges of the day impregnated half the women of the ‘Banner County’. If you don’t believe me, study the features of the next Clare man you meet!

As we write, there is the threat of a worse foreign visitor gate-crashing my space. Don’t be fooled by her Latin name, Corona. Caronee Wirus  – as they say in China. The English translation is Corona Virus.

Whichever political party promises to build a wall will get my vote at the next election…!!

Ability is what will get you to the top if the boss has no daughter.