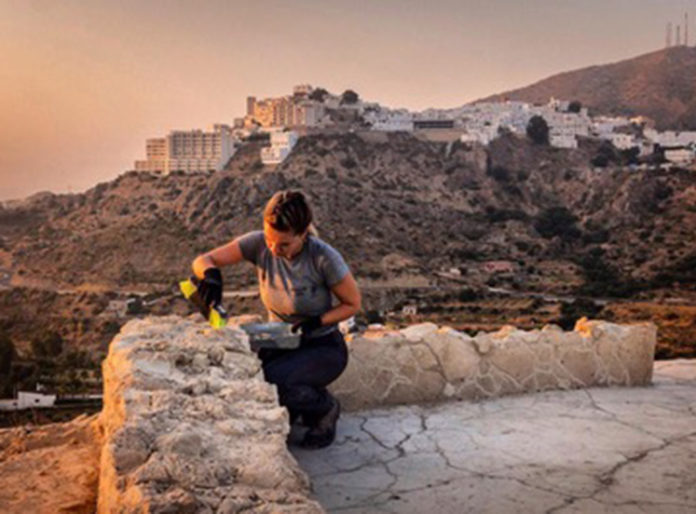 Noelia Aguado, who was born and grew up in Mojácar, began her training as a tour guide, a profession that is very much in keeping with her hometown where tourism is a top priority.

Her interest in culture then led her to graduate in Art History, but she did not anticipate then that her future was going to link so much to the past and, be so firmly attached to the deep roots of her beloved Mojácar and the hill that she had looked over to many times from the Plaza Nueva as a child.

Two years ago, she found out about the excavations on that very hill, Mojácar la Vieja, where Mojácar Council with the collaboration of the Valparíso Foundation, were inviting archaeologists from Granada University to work on the first Mojaquero settlement.

The Memolab biocultural archaeology laboratory was charged with taking on this incredible project, which went on to involve archaeologists from around the world, as well as the people of the town, all collaborating and working on the excavation with the Granada University project directors, José María Civantos and Julio Román.

Although Noelia did not really know what to expect, by the time the first campaign ended in the summer of 2018, she knew that she had discovered much more than the remains and ruins of centuries old ceramics, walls, towers and houses…….she had found her true vocation.

She then began an Archaeology Masters in Granada and linked her final project to the works and excavation campaigns carried out to date on Mojácar la Vieja. The enthusiasm and dedication she showed resulted in the award of a CH Study Scholarship from the Valparaíso Foundation that will enable her to study, classify, catalogue then digitize the materials and information that has been discovered.

Noelia plans to continue studying Mojácar la Vieja in relation to other Almohad sites, looking at similarities and other influences, although she proudly declares that Mojácar has a personal focus for her attention.  Now she is waiting impatiently for the third campaign to begin, with the scholarship in place to allow her to continue accessing her dream and continue working on a project she really loves.

Noelia added, “I am excited to see how Mojácar la Vieja has evolved in just two campaigns and in such a positive way”.  It is something which she and her family feel very proud of and, she summed up her enthusiasm by saying, “Mojácar la Vieja is not just another site, it is very important for the future of Mojácar.”