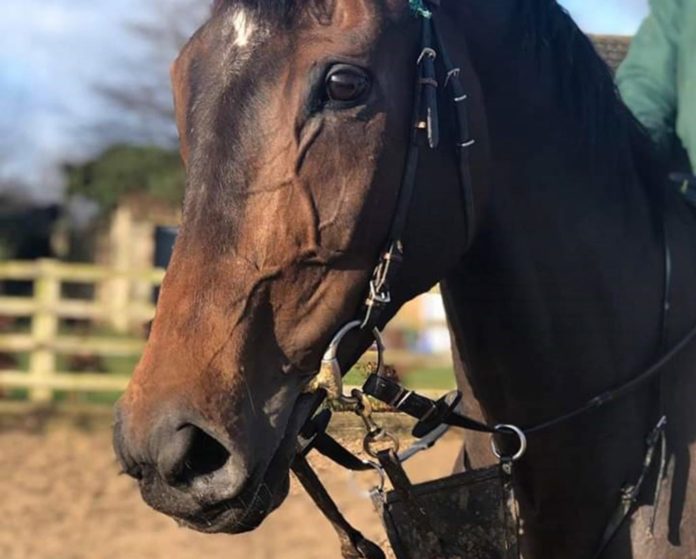 Lady Buttons is in good shape ahead of the four day 2020 Cheltenham Festival meeting during March 10-13.

“She’s in great shape ahead of her second Cheltenham Festival,” trainer Philip Kirby told me.

Ten year old Lady Buttons is entered in the Close Brothers Hurdle and the Betway Queen Mother Champion Chase at the Festival.

“A decision as to which race she will run will be made at the last minute,” said Philip, based at Green Oaks Farm, Richmond, Yorkshire.

“I will pick the best option – either won’t be an easy race – but hopefully one of the two will be easier. She is as well as I’ve had her,” said Philip.

Lady Buttons is owned by Jayne Sivills and Philip added: “The owners would like to run her in the Champion Chase – The Mares’ race looks particularly hot.”

Gordon Elliott trained Envoi Allen is tipped to win at Cheltenham – either in the Ballymore Novices’ Hurdle or Supreme Novices Hurdle: “If it’s heavy I wouldn’t rule out a switch back to the Supreme,” said Elliott.

At present Envoi Allen will go to post in the Ballymore: “He’s had three runs over hurdles and might have a schooling, to have another spin over hurdles. He is in good form – we’re very happy with him,” said Elliott.

Delta Work, amongst the favourites for the Gold Cup, Envoi Allen and Tiger Roll, in the Cross Country Chase, are Ace cards in Elliott’s playing pack: “Tiger Roll will be the one horse that we’re all looking forward to running at Cheltenham,” said Elliott.

Elliott said of Grade One winner Delta Work, a leading contender for the Gold Cup: “I think he’s made for the race. His style of racing will suit – three miles, two furlongs – the softer the ground, the better.”

On Apple’s Jade being at the Festival, Elliott said: “If she runs she’ll go for the Stayers’.”

“He’ll be at Cheltenham – in the ring with all the horses – part of the team,” said Elliott, who also saddles Cheltenham Festival Supreme Novices’ Hurdle entry Abacadabras.

Who Dares Wins, successful when winning at Kempton on February 22, could head for Cheltenham in the RSA Chase: “We freshened him up – to see if Cheltenham was on the agenda,” said trainer Alan King.

Eight year old Who Dares Wins has raced at Longchamp, Aintree, Cheltenham and Chester, amongst others, with the 2020 Chester Cup eyed in May, having been second at the Rodeye last year.

“Who Dares Wins has been a marvellous horse to be involved with,” said King.

The post LOOKING FORWARD TO THE CHELTENHAM FESTIVAL appeared first on Horse Racing News and Tips.