It is being held to celebrate the life of founder member of the band Bill Singleton who sadly passed away last September.

Bill was extremely well known on the local musical scene in which he was actively involved over a many, many years. As well as being a founder member of the RBL Band he was also in at the start of the ‘Oompah Band’ which gradually developed into the Alpengold Oompah Band, and then of the Phoenix Concert Band which he left two years ago because of other commitments.

Also taking part in Bill’s Memorial Concert will be three choirs, Studio 32 Theatre Group, Spangles Ladies Harmony Chorus and the Crescendo Choir as well as the Michelle Dance Group from the UK. 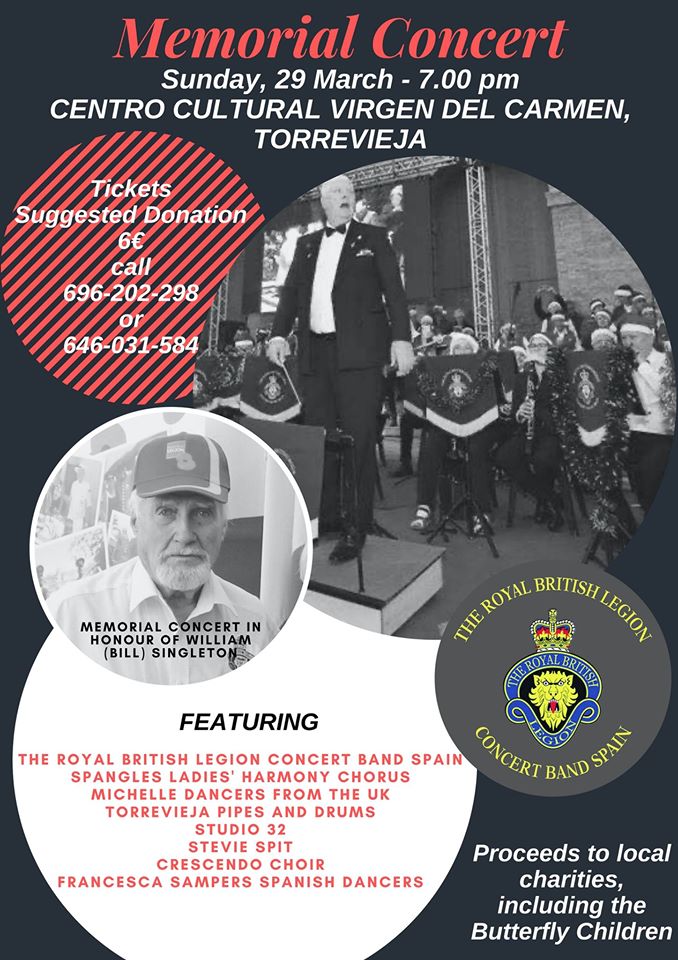 Francisca Samper, along with her entourage of Flamenco dancers, the Torrevieja Pipes and Drums, a performance by the Concert Band’s resident singer, the classically trained Valerie Lynch, and a special guest appearance from popular local entertainer Stevie Spit BEM round off the bill.

The band, under the musical direction of David Last, will play a selection of music from light classical to numbers from many of the west end shows.

Bill Singleton was a well-known figure in local music circles and had helped to entertain for many years before he sadly passed away, so it is expected that a large number of people will wish to enjoy this musical tribute to his memory.

Indeed it promises to be a most memorable and enjoyable evening.

Those wishing to attend are invited to make a €6 donation for tickets which can be obtained from the Card Place and Newsagents in Punta Prima and Benimar. They are also available in the Butterfly Children Charity Shop in Ciudad Quesada or by calling 696 202 298 or 646 031 584 with proceeds going to local charities including Debra Butterfly Children.