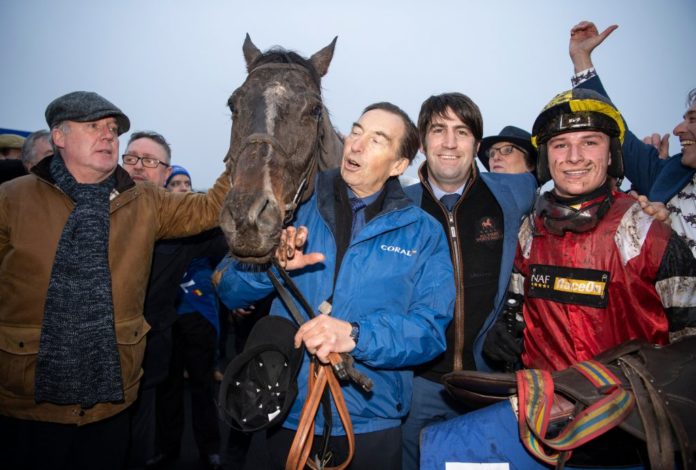 TOM Lacey, trainer of Kimberlite Candy, carrying 10st 4lb, is full of confidence of a good account in the 2020 Randox Health Aintree Grand National, priced at 20-1.

“He is in good order – a much stronger horse now – he’s really come to himself this year,” said Lacey.

“I thought he was very impressive in the Classic Chase, insofar the way he galloped to the line,” said Lacey.

“He’ll go straight to Aintree. All his best runs have been when he’s been fresh. He’s full of confidence, so we’ll look forward to it,” said Lacey.

“If we get a wet spring, I don’t see any reason why he won’t go there as a live contender,” added Lacey.

Jessica Harrison trained Magic Of Light (16-1) in National ante post betting, ran at Navan on February 16, finishing last of eight, behind Cracking Smart and Tiger Roll, who finished fifth, in preparation for the 2020 Randox Health Aintree Grand National on April 4.

Harrison, who saddled Magic Of Light to run second behind Tiger Roll in the 2019 National, said: “Magic of Light has plenty of tactical speed. He’s stepped up to the mark since he’s gone over three miles. I’m really happy with him.”

Magic Of Light, Irish trainer Harrington’s first-ever runner in the Grand National in 2019, will carry 10st 12lb in 2020.

Despite finishing last at Navan, there are many positives to take from Magic Of Light’s credentials, underlined when always prominent in last year’s National.

Anibale Fly, owned by JP McManus, trained in Ireland by Tony Martin, carries 11st 2lb and will be bidding to improve on finishing fourth and fifth, in the 2018 and 2019 Nationals.

Nicky Henderson’s entries include Ok Corral, 10st 9lb; Beware of the Bear, 11st; Valtor, 10st 4lb; and Dragon D’Estruval, 9st 13lb: “OK Corral and Beware The Bear would be the two to aim at it,” said Henderson.

“I don’t think Beware The Bear will go to Cheltenham. He needs a run – but I don’t think Cheltenham is the place to get ready for the National for him.

“I’ve hit six entered – and might run three or four – the main two are Yala Enki and Give Me A Copper,” said Nicholls.

“Yala Enki will be ridden by Bryony Frost. Give Me A Copper goes very well fresh – so will go straight there. He’s got a lovely weight, only 10st 1lb,” said Nicholls.

Colin Tizzard saddles Native River (16-1) and Elegant Escape. Assistant trainer Joe Tizzard said: “Elegant Escape is capable of being placed in Ladbrokes Trophys and Welsh Nationals, but he’s not quite a (Cheltenham) Gold Cup horse. If he got into a rhythm he could go well in a National.”

Tiger Roll, 5-1 favourite, bids to mirror legendary Red Rum’s trio of National victories, to become only the second horse ever to win on three occasions.

Tiger Roll carries joint-top weight of 11st 10lb, with a rating of 170, the 2018 and 2019 winner, saddled at the top of the Handicap, alongside stablemate Delta Work.

The post Grab a piece of Candy at 20-1 in Aintree Grand National appeared first on Horse Racing News and Tips.

UK situation worse by a government that does not provide adequate...