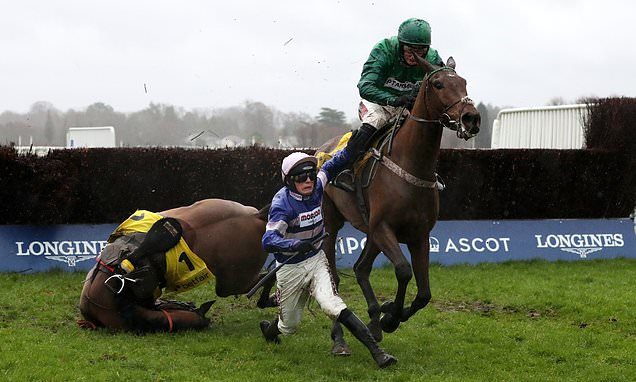 Cyrname trainer Paul Nicholls said: “When he got up it was brilliant and my God what a reception.”

Spectators gave a roaring cheer after Cyrname appeared to be none the worse after the fall: “The reaction of the crowd showed just how much everyone cares.

“The vets were brilliant – and thank God he was only winded,” said a relieved Nicholls.

“The main thing is that Cyrname and Traffic Fluide (fell last) are both okay,” said sporting winning jockey Sam Twiston-Davies.

“The target is the Ryanair Chase at Cheltenham and we will look at getting him there in the best of condition.

“Rider Onthe Storm is in the prime of his career – we are delighted,” added Sam Twiston-Davies.

Each-way tips, Valtor (6-1) ran second behind Ballyoptic; Jolly’s Cracked It (12-1) ran fourth (Skybet paid 5 places); and The Gallantway (9-1) finished second behind 2-1 favourite St Barts, under jockey Ben James at Ascot: “He is a young horse – and has a bright future,” said James of St Barts.

Tip, Sir Psycho (13-8) trained by Paul Nicholls and ridden by Byrony Frost, was an impressive winning selection at Haydock Park.