The “professional idiot,” a 19 year old Briton who climbs skyscrapers so that he can pose for and publish selfies on social media that were taken during the climb and at the top has today, Sunday, climbed the tallest building in Benidorm, the hotel Gran Bali.

During the course of the last week he climbed the three tallest skyscrapers in the city without any ropes or protection and then on Sunday the most challenging of them all saw him perched on the top of Grand Bali, the tallest hotel in Europe.

Far from being intimidated after being arrested and fined by the police, the young man has simply shown two fingers to Spanish authority and continued with his exploits, climbing to the top of the Gran Bali hotel, his deeds being recorded in a video and posted on his Instagram account.

In this week, the three tallest skyscrapers in the city have been climbed without any protection : the 192-meter InTempo building, the 186-hotel Bali, and the Lugano Tower, 158. 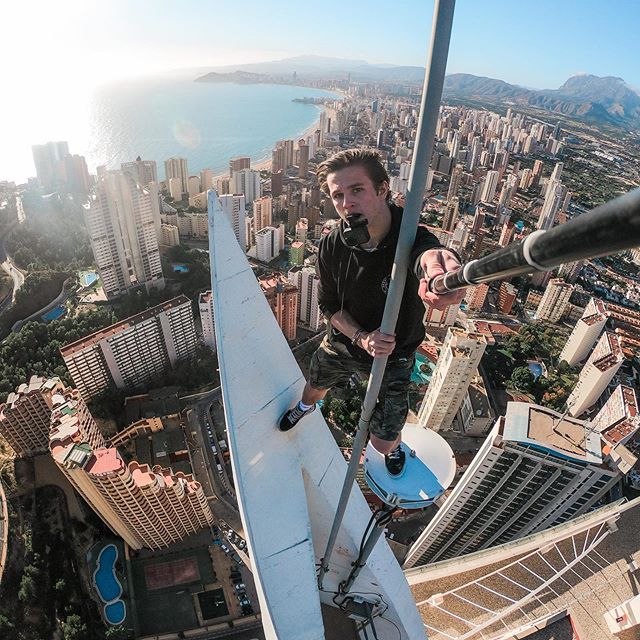 After his first climb, the Briton moved on to increasingly tall buildings and after the apartments on Avda Alfonso Puchades, he climbed the 82-meter RH Victoria hotel, and then he scaled another hotel located on the Calle Emilio Ortuño.

The next attempt was the InTempo, then the Lugano Tower and now the Grand Bali, with the common denominator being that at the end a ‘selfie’ is taken at the very highest part.

In some of the videos uploaded to social networks and to his YouTube channel, it can be seen that some of the climbs are made accompanied, with another person appearing on top of the property that is not identified.

His accounts show that he has climbed similar structures in other cities across the world but in many of his videos he advises people not to imitate him because, he says, his exploits are “dangerous, stupid and illegal”.

At least, then, we agree on one thing.