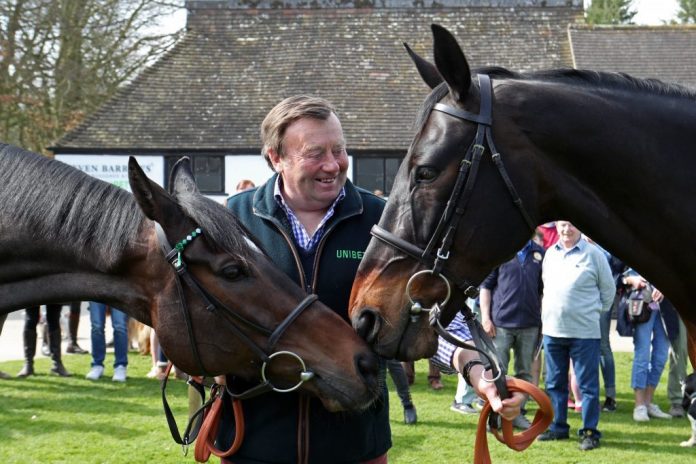 NICKY Henderson saddles a plethora of runners at Cheltenham on Saturday – with Monte Cristo (12.40) set to land the opening Triumph Trial G2 race over 2 miles, under jockey Daryl Jacob. For the best prices with an introductory offer on all of them you should look no further than William Hill

Imperial Aura (1.15) trained by Kim Bailey, second at Cheltenham in December over 3m 2f, is tipped to win under jockey David Bass.

Lalor (1.50) trained by Kayley Woollacott and ridden by Aiden Coleman, third at Cheltenham on new year’s day when beaten a nose and a nose, is tipped to win the Paddy Power Handicap Chase, over 2m 4f.

Santini (2.25) trained  by  Nicky Henderson and ridden by Nico De Boinville is tipped to get the upper hand of Top Ville Ben, trained by Philip Kirby in the Paddy Power Costswold Chase.

Entered in the Cheltenham Gold Cup, Henderson trained eight-year-old Santini (6-4) ran third in the Albert Bartlett Novices’ Hurdle, and finished second in the RSA Novices’ Chase in 2018 and 2019 Festivals, respectively.

Top Ville Ben, stablemate of Lady Buttons, priced at 6-1, is worthy of each way support under talented jockey Tommy Dowson.

King Roland (3.00). Paisley Park (3.35) is tipped to win the galliardhomes.com Cleeve Hurdle. Odds-on 8-11 favourite Paisley Park, trained by Emma Lavelle, gained a one length win ahead of Thistlecrack in the Ladbrokes Long Distance Hurdle at Newbury in November.