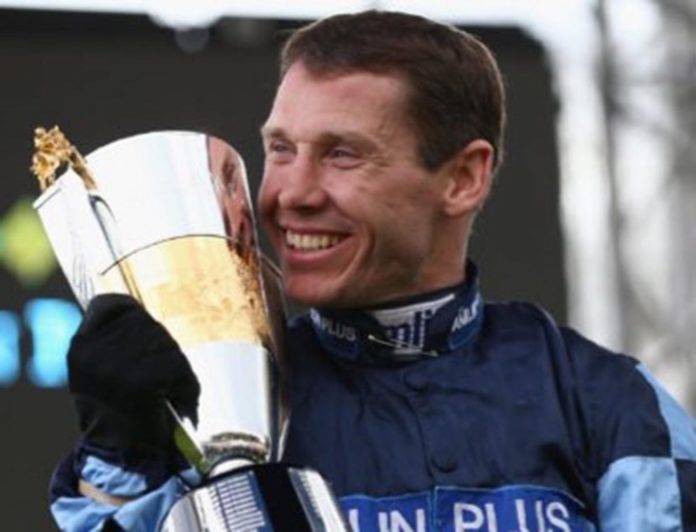 Champion jump jockey Richard Johnson could face a ‘triple-whammy’ – after sustaining a broken arm at Exeter on Tuesday.

Johnson said last night he is confident he will be back in the saddle for the Cheltenham Festival, just seven weeks away.

Johnson, 42, four times champion NH jockey, was taken to Exeter General Hospital to undergo X-Rays, in the wake of being unseated from his mount Westend Story in a Novice Chase.

Johnson was told the bad news on Tuesday night – putting a question mark as to whether he will be fit for the 2020 Cheltenham Festival, that commences on March 10.

Johnson – yet to win the Aintree Grand National – could also be ruled out of the world’s most famous jumps race in April, if his recovery takes longer than expected.

Johnson, who lead fellow jockey Brian Hughes vying for the title, prior to his setback, was also kicked by horse Fox Pro, when unseated.

Exeter medics raced to Johnson, who was lying in pain on the turf, aiding him up, prior to being taken to Exeter General Hospital.

Ahead of Tuesday’s racing Johnson lead Hughes, on 117 winners, three ahead of his counterpart, with the current champion facing up to two months out with a broken arm.

Johnson was awarded the OBE in the 2019 Queen’s New year’s honours list for services to Horseracing.