The mayor of Guardamar del Segura, José Luis Saez, has confirmed that he has reported the dangerous state of the rescue tower at la playa de Viveros, which is leaning at an angle of 15 degrees as a result of its base being eroded by heavy waves.

“We have two options, either to take it down or to try and restore it to a vertical ” the mayor told the local press, explaining that the area surrounding the tower is roped so that if it falls it will do so in a space “where there is no danger.”

Saez has said that the storm is “doing lots of damage on the coastline” although it is too early to make any real assessment and it will be necessary to wait “another three or four days to see if the sea is going to withdraw so that the reconstruction work can get underway”. 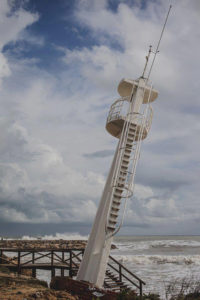 However, the Beach Council will meet on Wednesday to request the Valencian Tourism Agency “make investments in the coast” and replace the broken and damaged street furniture so that the beaches can be ready to welcome visitors to the area for the beginning of the summer season during Holy Week.

However la Asociación de Vecinos de Guardamar Playa say that they again want to draw public attention to “the disastrous management of the coastguard of Guardamarrenco, warning of the dangers and consequences of the encroachment of the sea along this strip of coast” in relation to the Maritime surveillance tower located next to the mouth of the Segura, on la playa de Viveros.

Association secretary, Manuel López, said that the dangerous angle at which it currently teeters “is no coincidence as it is located in the shadow of the breakwater at the mouth of the river, a place where there is the maximum degeneration on the beaches of Guardamar.”

López added that this is not the original location of the tower, as it had to be moved from its original position because of precisely the same problems, erosion of the beach caused by the waves back in 1995.

You Can’t Be Serious – Constant change is here to stay…