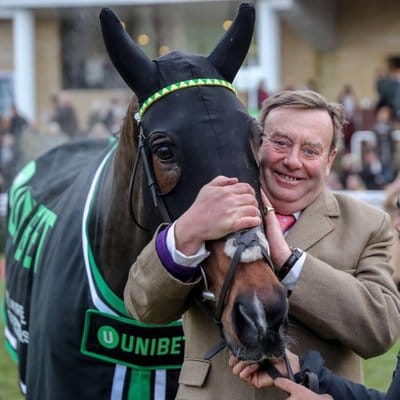 DESPITE Cheltenham racecourse ruling out an extension of the annual March four-day Festival, backing in favour has been aired by top trainers.

“Cheltenham is the best – win or lose. It’s what we all strive for – the more days the better,” said trainer Colin Tizzard.

Toying with an additional day’s racing at the Cheltenham Festival was initially voiced by new chairman Martin St Quinton – since overruled.

Tizzard is amongst leading trainer Nicky Henderson OBE, Gary Moore, Philip Hobbs and Alan King, in airing a ‘thumbs-up’ to a five-day meeting.

On a five-day Cheltenham Festival, Moore, points out: “Royal Ascot is five days – so why not Cheltenham?”.

Allmankind, trained by Dan Skelton, is worthy of a punt at 7-1 in the JCB Triumph Hurdle at the Cheltenham Festival.

Allmankind will remain away from action, after having an annual flu vaccination, until the Cheltenham Festival: “Allmankind is among the favourites for the Triumph.

“If I can get him to turn up in the form he’s been in, he’s going to be a top end competitor. I’ve got to make sure that happens,” said Skelton.

Wins at Warwick, Cheltenham and Chepstow have seen Allmankind ante-post odds cut for The Triumph, with Aspire Tower (5-1) and Goshen (6-1), the latter supported after an impressive win at Ascot on January 18, among leading fancies.

*Nicky Henderson: Got the stamina for 5-day Cheltenham Festival.