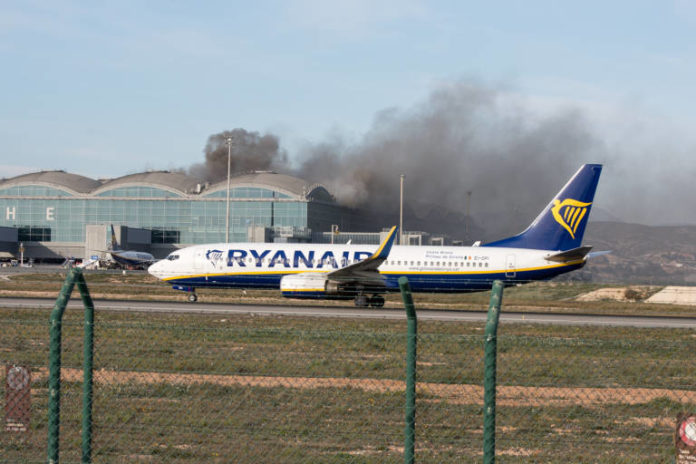 The fire leaves the Costa Blanca without an airport until 2 pm: diversions for 160 flights
Alicante-Elche airport will remain closed to air traffic until at least 2:00 pm due to the complexity of the firefighting work on one of the floors in the departure area, where the fire is still smouldering.

Initially, sources at the airport s said Wednesday that the facilities would remain closed until 12 noon, although this morning, in view of how the fire remains, they have decided to postpone the resumption of activities at least until 2 pm.

A spokesman for Alicante airport, the fifth most important in Spain by volume of passengers, has asked passengers not to go to El Altet this morning and to check with their airlines before travelling to see if their flight has been cancelled or diverted to others airports, Valencia or Murcia.

Spanish Airport and Air Navigation (AENA) sources have said that the fire, which started around 2:30 pm on Wednesday, is still being dealt with by firefighters who have continued to work throughout the night and that although progress has been made in the control of the fire, it is “not yet extinguished”

They say that firefighting tasks are very complex due to the composition of roof materials which caused the combustion and which generated a large amount of smoke, visible from several kilometres away.

So far, the fire has affected more than 1,200 square meters of roof and also the VIP area of the airport, and has forced the cancellation or diversion to Valencia and Murcia airports to several dozen flights.

Airport sources said that a crisis cabinet has been established that was assembled on Wednesday night and again this Thursday morning at 8 am. It has agreed that the airport runways will remain closed at least until 2 pm, pending the progress of the firefighting work currently in progress.

On Wednesday, 14 departure and 21 arrival flights were cancelled, and all affected passengers have been asked to check with their airlines to find out if their flight will go ahead today or if it has been moved to either Valencia or Murcia airport.

A total of 2,000 people were evacuated from the boarding terminal and the rest of the airport grounds as a result of the fire on Wednesday, without any injuries or personal damage, according to Spanish Airports and Air Navigation (AENA) .

Air traffic resumed around 4 pm on Wednesday with the diversion of four flights, one to the Valencia airport and another three to the Murcia region. The first plane that took off after the incident was Ryanair’s flight FR7063 to Dublin, with about an hour and a half delay.
However, at 6 pm on Wednesday, AENA reported that the airport would remain closed to air traffic until Thursday at 12 noon, later extending it until 2 pm.

Thus, they have had to reschedule all flights, both departures and arrivals to the terminals at Valencia and Murcia.

It is estimated that more than 160 flights have been diverted. As for road access, the Civil Guard has diverted traffic and is still not allowing access to the airport parking area.