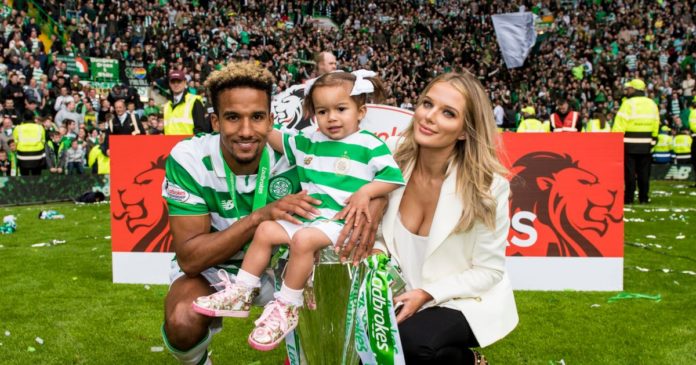 Helen, 29, aka Rosie Webster, in ‘Corrie’ is set to return to the tv soap: “I miss Coronation Street so much – I’m definitely going to go back,” said Helen.

Helen will be watching Scott at Deepdale, as Preston bid to push for promotion to the Premier League, having watched at Celtic, during his time at Parkhead.

Bath born winger Scott, 30, joined Championship club Preston in the January transfer window, on a two and a half year deal.

“Scott has sampled promotion before, and played at big clubs. He will add that ‘know-how’ of getting the job done,” said Lilywhites boss Alex Neil.

Scott, who began his career at Chelsea, joined Celtic, when signed by Brendan Rodgers in August 2016.

Scott, who scored 62 goals in 167 appearances for Celtic, won promotion to the Premier League with Swansea in 2011.

Sinclair, was out of contract at Celtic this summer. Hoops boss Neil Lennon said: “Scott had a great time here – but wanted to play more – Preston are giving him that opportunity.”

Scott, Player of the Year at Celtic during The Hoops unbeaten treble in 2016, and Northern lass, Bury born Helen, will be looking for a new home with their two daughters.

Daughters, Delilah, born at the Queen Elizabeth Hospital, Glasgow, and Matilda, who attends nursery in Glasgow, born in Birmingham in 2015, when Scott was playing for Aston Villa.

After twelve years on Corrie’s cobbled streets, Helen quit in 2012, the year she appeared in tv show: ‘I’m A Celebrity – Get Me Out of Here!’.

Having, returned to Coronation Street in 2017, Helen, who appeared at the Scots Baftas in November, went on Maternity leave in April 2018.

Helen and Scott, who celebrated the New year in Dubai, are getting married this year.

“I’ve been waiting to sign for Preston. I am so delighted to get the deal done,” said Scott.