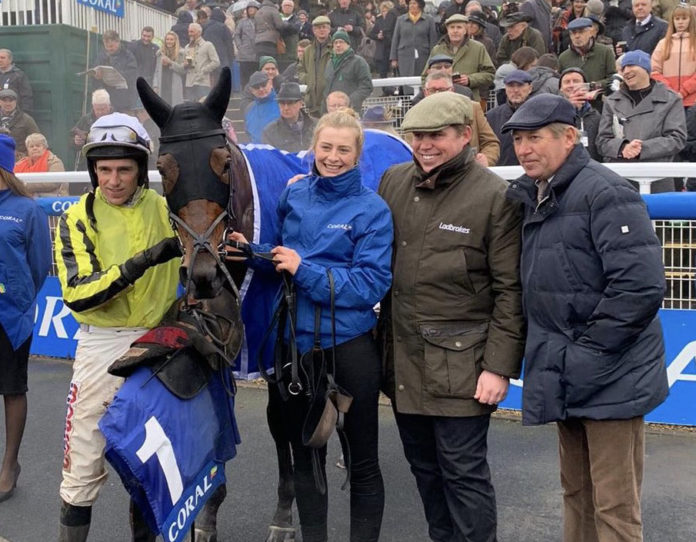 Allmankind gained his third win, from three outings over hurdles, when winning the Grade 1 Coral Finale Juvenile Hurdle, under Harry Skelton at Chepstow.

Allmankind, 11-10 favourite, fromthehorsesmouth.tips selection, is priced at 8-1 for the Triumph Hurdle – slicing the odds in half.

“It was a magic ride by Harry. He said Allmankind was a bit sloppy at a couple of hurdles, but went away,” said trainer Dan Skelton.

“Allmankind is a horse with a great attitude,” added Skelton, after beating Cerberus by 9 lengths, in an incredible performance at a mud-splattered, foggy, Chepstow.

“We picked up three out. He is starting to learn, and settle a bit more and handled the ground very well,” said Harry Skelton.

Tarada (1-2) selected by fromthehorsesmouth.tips obliged at Wetherby, winning by 8 lengths. Owned by Trevor Hemmings, trained by Oliver Sherwood and ridden by Leighton Aspell.

Quarenta (7-1) selected each-way by fromthehorsesmouth.tips went down a head in a photo finish verdict at Kempton.

Goobinator (8-15) also went down by a head at Wetherby. Hawk High (11-4) ran second. Wildfire Warrior was a non-runner at Chepstow.

Newmarket and Uttoxeter success for Atkinson