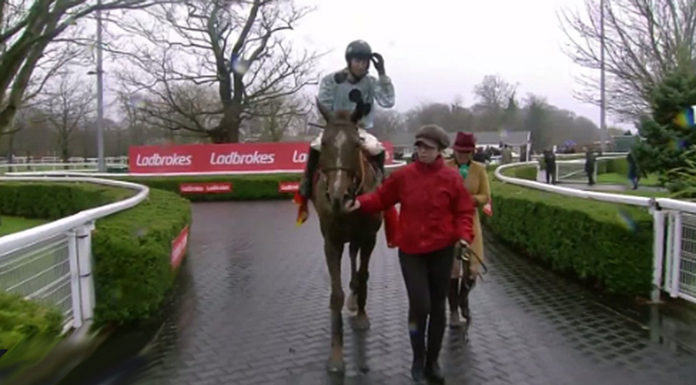 HONEST Vic’s win in the Ladbrokes Handicap Hurdle at Kempton Park on Boxing Day KO’d the bookies – one of six Christmas cracker selections by fromthehorsesmouth.tips that returned 33,628-1 on a Lucky 63 and Heinz 57 bets!

Trained by Nicky Henderson, Epatante was selected  by fromthehorsesmouth.tips on Thursday at ante post 5-1, backed from 5-2 on course, to 2-1, after punters lumped on the cash.

Epatante is priced at 11-4 for the Champion Hurdle with bet365 after beating Silver Streak, trained  by Evan Williams team, with Ballyandy finishing third.

“She was impressive – I’ve got to admit it myself – it was very good,” said Henderson.

Commanche Red was a winning selection by fromthehorsesmouth.tips in landing the Ladbrokes Chase at Kempton over 2m 4f – tipped at ante post odds of 10-1 – backed on course from 7-1, to 4-1.

Cyrname, finished second to Clan Des Obeaux in the Ladbrokes King George V1, the latter having jumped faultless, to gain an impressive 21 lengths win, returning back to back victories. Footpad finished third.

“To ride for Paul with such a good chance in a race like this is a real buzz,” said Twiston-Davies.

“Paul said try not to hit the front too soon. Over two out we just had to go – luckily he winged the last – and did it really well,” said Twiston-Davies.

“It’s nice to have a one-two and it’s nice for Sam to ride a Grade 1 winner,” said Nicholls.

“I knew the more it rained the more it would suit ‘Clan’ – he’s stronger and better than last year,” said Nicholls.

Storm Arising (5-2) from 3-1 selected each-way by fromthehorsesmouth.tips was placed at Wincanton.

Sammy Bill at Wetherby and Atletico at Wolverhampton were selected non-runners.

*First Past The Winning Post fromthehorsesmouth.tips. No.1 for racing!