FOOD Banks in Spain will once again rely on Charity organisations – with many in the Costa Blanca and Costa Calida areas – this Christmas.

At a time where the annual Gran Recogida – Big Collection – takes place during the Christmas season, volunteers will hand out bags to supermarket shoppers with the request to buy something to be donated to food banks in Spain.

While we celebrate Christmas this year, many homeless refugees across Europe, will be with little food and drink, in cold winter conditions.

This is at a time when the Royal Family were reportedly left £50m by Sir Donald Gosling who died, aged 90, in September.

Sir Donald, a multi-millionaire businessman who owned National Car Parks, left the eye-watering sum in his will – to go towards a scheme to commission a new Royal YACHT!

According to 2018 figures for Spain, a record total of 54,065 asylum applications were made, making it the fourth country in the European Union with 8% of the total, above Italy, the UK and Sweden. 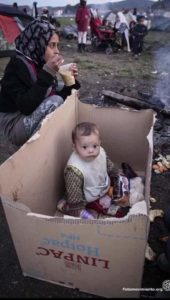 This is also a time where Ayuntamientos – Town Halls – throughout the Costa Blanca and Costa Calida regions, also annually open their doors leading up to Christmas, for people to donate both food and gifts.

In addition there are tens of thousands of volunteers throughout Spain and 10,000 shops, where food can be donated between Barcelona and Madrid; from Sevilla, Bilbao, Málaga, Valencia, Las Palmas, Granada and Gerona.

The Leader has seen for themselves hungry families, with young children, scouring through rubbish bins for food this Christmas. I was personally approached by a family, who have a young child, asking for help this Christmas, as the cash-strapped household struggles.

All this at a time where £50m has been left to the British Royal Family – to go towards a scheme to commission a new Royal yacht.