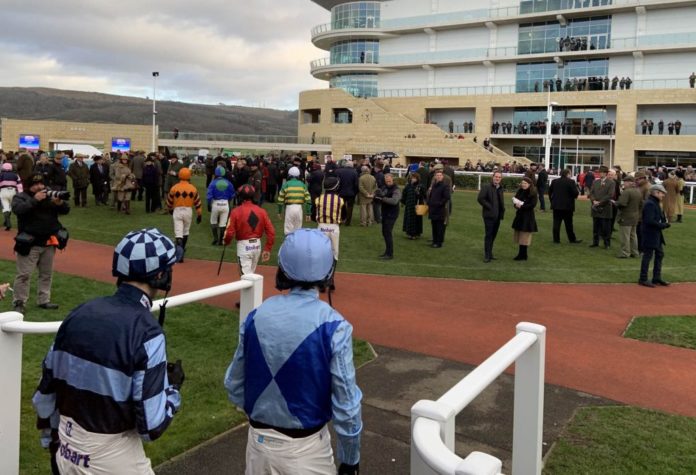 HEADLINE fromthehorsesmouth.tips selection Mister Fisher returned to the winner’s enclosure at Cheltenham on Saturday, when landing the Ryman Novice Chase, over 2 miles and 4 furlongs.

Trained by Nicky Henderson and ridden by Nico De Boinville, Mister Fisher drifted on course to 3-1, before the money was lumped on, to 15-8, gaining victory, ahead of Good Boy Bobby (9-4).

Mister Fisher has been backed in to 12-1 for the JLT Novices’ Chase at the 2020 Cheltenham Festival in March.

Mister Fisher was always in contention behind Good Boy Bobby, trained by Nigel Twiston-Davies. Henderson said: “He was good – despite it not being his ground (soft).

“He was good – although got a bit low at one – which frightened me. It is amazing how much experience counts.

“He has grown a lot through the summer and will be a better horse on better ground. Hopefully he might be a JLT horse.”

Call Me Lord, ridden by James Bowen, held kept on ahead of gallant Ballyandy. Trained by Nicky Henderson, trio Call Me Lord, Pentland Hills and Ch’tibello lead, with Ballyandy staying on, a neck separating the winner, with Ch’tibello, third.

“Well done to James. I feel so sorry for Daryl Jacob, who has broken his hand. Hopefully he will be back very soon,” said Henderson.

“If it is good ground, there is also Verdana Blue for that and Epatante – we could run the three,” said Henderson.

Finespun, fromthehorsesmouth.tips  selection, trained by John Gosden and ridden by Robert Havlin, went under by a nose in a photo finish.

Be Proud (10-3) trained by Jim Goldie and ridden by Danny Tudhope was a winning selection by fromthehorsesmouth.tips.