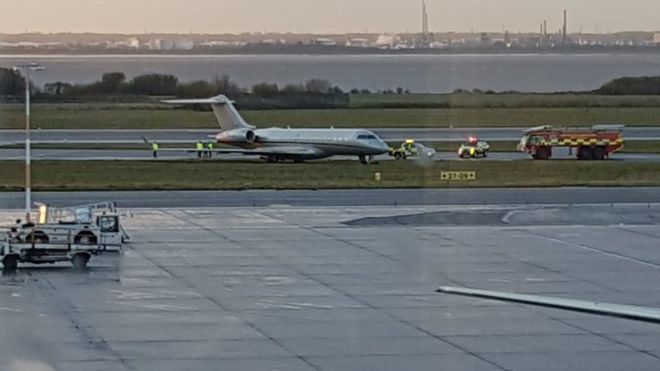 FLIGHTS from Alicante-Elche to Liverpool John Lennon Airport were delayed on Wednesday – after a private jet skidded off the runway – that caused flight cancellations and delays.

Mike Gordon, billionaire owner of Liverpool football club, was aboard the private jet, that closed John Lennon Airport, after over shooting the runway.

The EZY 22.40 arrival flight from Alicante-Elche airport to Liverpool John Lennon airport is scheduled  to land at 0.10 Thursday, December 12.

The private jet overshot the runway, following arrival from Massachusetts, where Mr Gordon had been scheduled for a series of meetings at the Premier League leaders’ club.

No injuries were reported following the incident that lead to Emergency Services dealing with the incident.

Flights arriving from Salzburg, where Liverpool played in the Champions League on Tuesday evening, the Isle of Man and Dublin, were diverted to Manchester, with flights from Belfast and Amsterdam also cancelled.

Liverpool John Lennon Airport, which cancelled all flights after the private jet veered onto the grass, had ongoing problems throughout the day.

“A private business jet with four people on board, three crew and a passenger, landed, but then came off onto the grass, and skidded off the runway.

“Anyone travelling from the airport today (Wednesday) is advised to contact their airline for the latest information.

“We apologise for any inconvenience caused and can assure customers we are doing all we can to resume services as quickly as possible”, said a spokesperson from Liverpool John Lennon Airport.

The incident left many passengers stuck in the departure lounge, and on aircraft, waiting to depart.

A passenger waiting to board a plane said on Twitter: ‘Sat on an @easyJet flight waiting to leave @LPL-Airport but an aircraft has come off the runway and we are now stuck. Any updates, anyone? #liverpoolairport.’

What Are the Rules of Playing at Foreign Online Casinos?