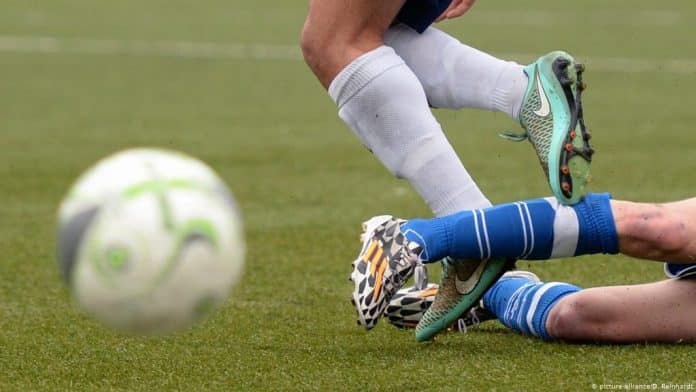 Not a great start from the visitors, who, within two minutes of kick off Daya conceded a penalty so not the start they expected or wanted.

Saladar had the bit between their teeth following their early lead, but to be fair to the visitors they worked their way back into the game although the home side carried the greater goal threat.  On twenty eight minutes Ruben (who was carrying an injury and was waiting to be subbed) put Roberto through with a great pass that was gratefully accepted and thrashed home for 1-1.

Saladar did have the ball in Daya’s net a few minutes later but it was ruled out for offside.  On thirty six minutes the home side went 2-1 up when Daya gifted them the easiest of goals.  The visitors should have equalised just before half time but could not force the ball over the line even with the keeper stranded.  So Daya found themselves 2-1 down at the break.

The second half was just five minutes old when Sardi’s run and cross was fired home by Roberto to level the scores.

So could Daya now go on and win the game?  On sixty eight minutes Ivan put in a great through ball that forced a good save from the Saladar keeper.  The ball came back to Ivan who sustained a nasty injury when his leg buckled under him and he had to be carried off.  The game had now become a farce with the ball mostly high in the air and players from both sides laying “injured” on the ground!!

They made amends just a couple of minutes later when a good move and finish made it 3-2.  The home side finished the game the stronger and had a couple of good chances to add to their tally.  Daya won a free kick in extra time just outside the box, Braulio took the kick but hit the post with the keeper beaten!

So a 3-2 defeat to a team that only had six points before the start and with all the bookings Daya are accumulating I doubt they will be able to field a side soon.

Pola and Daya contribute to great game of football

The WHO says that Coronavirus cases in Italy and Spain are...