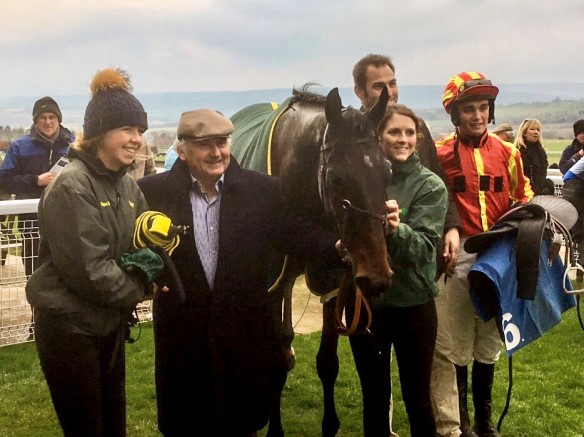 TRAINER Philip Kirby spoke to fromthehorsesmouth.tips on Saturday morning about the decision of Lady Buttons’ task against Buever D’Air at Newcastle, having also entered the Richmond, Green Oaks Farm stables star at Newbury.

“The decision was made to swerve the journey to Newbury, following an optimistic update from Newcastle at 6.45am on Saturday,” Philip told fromthehorsesmouth.tips.

“The frost covers appear to be doing their job. And Lady Buttons heads our team of four this afternoon,” said Philip.

“It is without doubt a huge test for Lady Buttons. We are not going to Newcastle saying she is going to win,” said Philip.

“But, hopefully she will run a big race. Lady  Buttons is fully entitled to take her chance,” said Philip.

“Who knows what will happen on this ground? And with only four other rivals it has to be worth a shot,” said Philip, with the going heavy.

“Lady Buttons has won at Newcastle and will not be inconvenienced by the ground,” said Philip.

Buever D’Air is odds-on 3-10, red hot favourite – but that has not undeterred Team Kirby: “Reports from the Henderson camp have been bullish all week.

“Of course, we are talking about a dual Champion Hurdle winner. There’s no denying Lady  Buttons (7-1) is keeping the best of company.

The decision to head to Newcastle was made after a severe overnight frost threatened racing going ahead – with the Newbury option in hand.

Philip thanked fromthehorsesmouth.tips for featuring Green Oaks Farm stables horses during 2019: “Thank you for your fantastic support – we appreciate it very much,” said Philip.

Lady Buttons has a huge fan club, with scarves available to buy, direct from the Green Oaks Farm stables.

In a message to Lady Buttons supporters, Philip said: “You have most certainly made her the ‘fan favourite’ that racing has now dubbed her.

“There promises to be lots of purple and white scarves donned in her honour at Newcastle on Saturday afternoon.

“Best of luck to her owners Jayne and Keith Sivills, and regular jockey Adam Nicol. Most of all, a safe return for our ‘Queen of the yard – and the North’s favourite Lady.”

Speaking about Top Ville Ben, Philip said: “Jockey Tommy Dowson is delighted to get the leg back up. They were a formidable partnership round Hexham, on ‘Ben’s’ first Chasing start.

“Tommy will be hoping  he can kick-on where he left off, with a bold bid in The Rehearsal Chase, to round off a top class card.

“Ben jumped well, first time out at Wetherby, and if that race has brought him on, there is every chance his Grade 1 Aintree form should  give him a huge shout this afternoon.

“We are glad he is not top weight. Every little helps, when the ground is heavy.”

Oak Vintage will be ridden by Tommy Dowson and Robbing the Prey ridden Adam Nicol: “Both are capable of a big run, although the ground will be on the slow side for Oak Vintage, whose best form is on a sounder surface.

“He is well handicapped now though, and was going well at Wetherby, until a mistake at a crucial time,” said Philip.

“Robin too could put in a big run. A gorgeous horse, who makes his debut run for us at Newcastle,” said Philip.