Did you know Alicante has its own star-crossed lovers whose sad tale is just as heartbreaking as Romeo and Juliet? Or that St George is the patron saint of a beautiful city in the Spanish mountains?

Journalist Sarah Farrell, who was born and brought up in Kent in England, has been discovering these amazing legendary tales since moving to Spain. She has just launched the first book in the Secret Spain Travel Guides series to share some of her favourite tales. This book, Visit Alicante’s Myths And Legends, recounts some of the incredibly heroic stories from the medieval times when the Moors ruled much of Spain.

“Spain is fascinating. Even the smallest town has its own fiestas and amazing stories. I wanted to share legendary tales from Spain to celebrate these heroes. Many are based on true stories, such as how a brave woman, Armengola, saved Orihuela’s townsfolk from being massacred in the Middle Ages. Others can be taken with a pinch of salt. But they’re all beautiful,” said Sarah.

People visiting the Costa Blanca or Alicante province are being encouraged to go on an imaginary journey to discover:

Then, when they visit Alicante and the Costa Blanca, they can follow in the footsteps of these amazing historical figures. 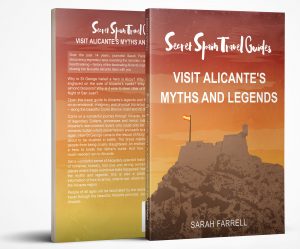 The Alicante travel guide showcases the best places to visit, where to eat, where to stop and great restaurants as well as favourite places to take incredible photos to show off on Instagram. Readers will also take away a secret from each of the towns featured, namely Alicante, Guardamar del Segura, Rojales, Orihuela, Alcoy and the Jalón Valley.

“I want people to read these stories and be inspired to visit Alicante to see the very places where they took place. To walk in the footsteps of the heroes and heroines in this book,” said Sarah who has been living in the province of Alicante since 2005.

Visit Alicante’s Myths And Legends is available in paperback and ebook from the Amazon store.

Bishop, his sister and brother-in-law accused of jumping the vaccine queue