Pint Depot Queens failed to capitalise on a 5-1 half time lead, managing just one more leg in the singles. All credit however to the Chicks from Chemies, who must have envisaged a real away drubbing with six to play, however, five of the six went their way to earn a well deserved draw.

Maggie Morgan D12, Lorraine Cox D16 and Morgan D18 opened the  Queens account in the triples, Ronnie Bowden D5 making it four to nothing in the first pair, before Chick Sue Collins D1, halted the slide. Cox D8 returned the hosts to winning ways for a 5-1 half time scoreline.

Morgan captured the eleventh leg on D1, ensuring at least a point for the hosts, leaving Marie Cummins to face visiting Chick , Collins for the win or draw. MOTM Collins nailed D20 for shared points, Bowden earning her honor for the Queens.

Gino Rouzee and the Legends entertained the Hub in the salubrious surroundings of High Life. Some pretty decent darts were thrown by both sides, but it was the Hyenas who edged the result by way of Bob Taylor in the tenth defeating the very capable Sandra Crabb 0-2 on D8, who managed her first maximum, unfortunately it was in the warm up. l’m sure however, it won’t be the last for the diminutive Legend.

Some impressive scoring from Joe Miller and John Eyre put the Legends under pressure earlier in the match, although Terry David 119 and Barry Shingler D3 bagged the second triple. A D9 from Paul Durrant made it 1-2 to complete the threes. Miller 122, 140 and Taylor D4,D16, extended the lead,their opponents Rouzee and David unable to capitalise on their heavy scoring. Shingler and Sandra David both found the T20 an easy target, pulling one back for the Legends.

Eyre and Durrant  shared four tons, each finding D16 for 0-2, Roger Phipps pounding the T19 with 95,133,95,85 to no avail against the formidable duo. Alex Nikolov gained the vital sixth leg and point for the visitors, followed by Taylor’s win. Durrant made it eight in the penultimate game facing the useful Rouzee taking out the leagues highest finish to date, a tasty 156, T20,T20,D18, for the first and D8 for 0-2.

Shingler reduced the deficit in the closing game in a real tussle with Eyre on D4 for 2-1. Shingler and Phipps couldn’t be separated for the MOTM, Durrant nominated for the Hub.

The Three T’s made the short journey to the Plaza to take on old friends – the Alehouse. Traditionally this has been a close run affair and Wednesday’s meeting was no exception. The first match was going well for the Toppers who wanted D20 when up stepped the balletic Andre Wing who polished off 99 – 1 up to the Alehouse. The first half of the match then ebbed and flowed with some steady if unspectacular darts leaving the score 3 all at the break. 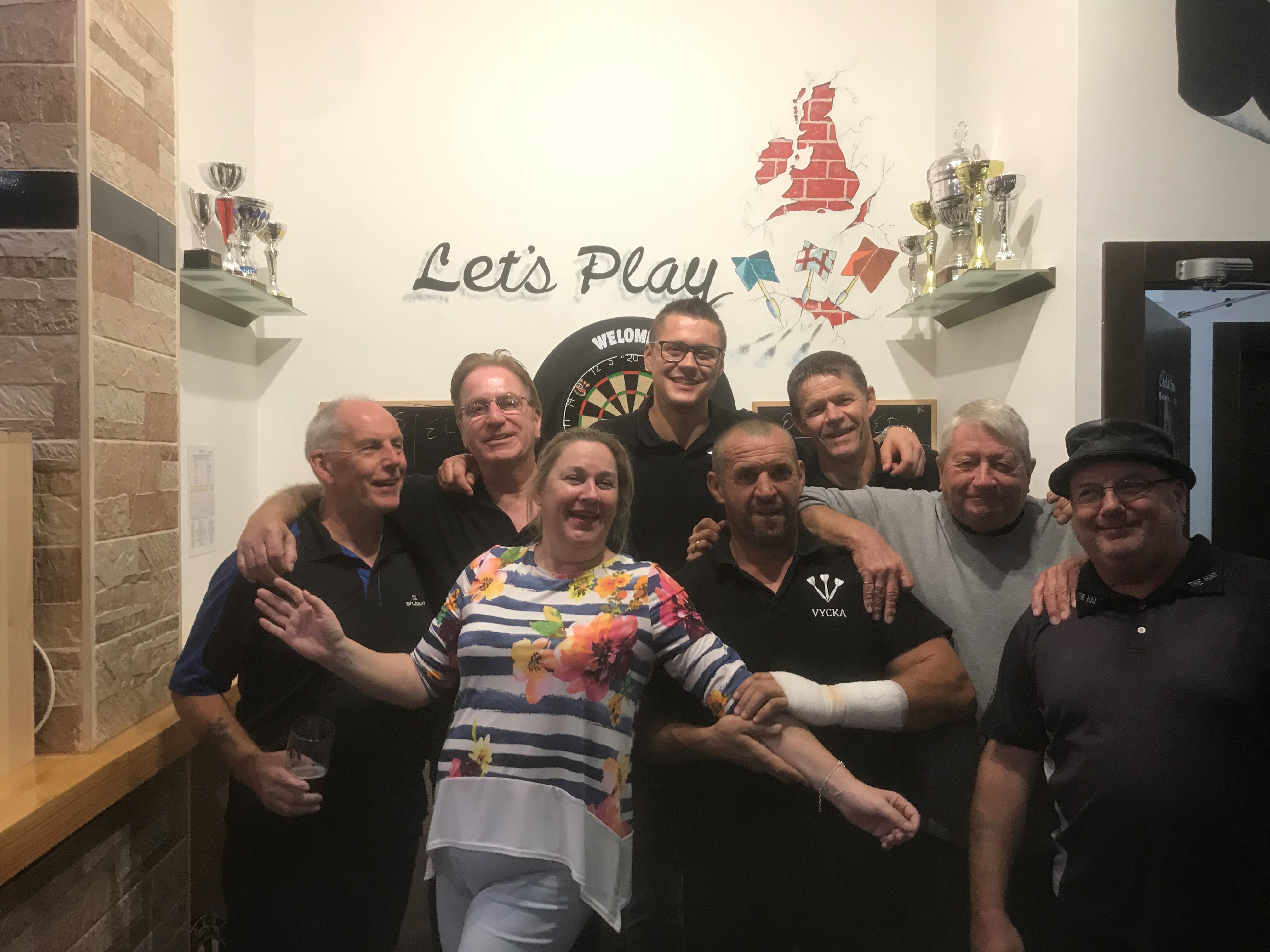 The singles began well for the Toppers with good wins by Graham Solomon and Lee Maiden giving the away side a 5 – 3 lead. Almost immediately new signing Dario Sierra brought the home side right back into contention with a good win over in-form Andy Gildea.

This was followed up by two more home victories by Alan Havelock and bar owner, captain and all round good bloke Karl Mallinson. So 6 – 5 to the home side and all to play for and onto the stage stepped two of the most eccentric – in the nicest possible way – players in the league – Andre Wing and Baz Schoffield.

The game was nip and tuck with good and really bad scoring adding to the tension but it was Baz  ‘thanks for popping in’ Schoffield who prevailed to leave the result 6 apiece. Good company , good darts and a good night out.

El Capitan arrived on time to be faced by a formidable line up of darting legends- van Gerwin, Taylor, Lewis in the first triples, Wade, Anderson and Cross in the second.  The Tiaras were already 6 legs up before the chaps arrived so it looked like it was going to be a good contest until the opposition insisted we wiped the score board clean and start from scratch, spoil sports!

The Tiaras barely got a look in, despite a few good scores, there’s just no arguing with streams of 100+’s from the league-toppers.  It was only Princess Elizabeth Cowan that showed any true spunk, scoring 140 and 2 tuns to take a single leg off Ed Klimonis in her singles, earning her MOTM.  Junior Klimonis, Aroldas, was awarded the same for his 105 check-out.

Committee member ( at the moment ) Sid Cross offers his sincere apologies to the San Miguel Bullies for losing the result sheet, therefore  no match report. A quick call to confirm the Pirates loss, quelled ever growing rumours of match fixing fron the larger than life Sidcup fugitive Cross.

This weeks ” Spot ” is recently relocated Cameron Nesbitt, the larger than life licensee of C.C.’s bar, La Zenia. lncidentally, the other ” C ” of their name comes from wife of sixteen years, Claire.

The popular couple have been esconsed in Spain for just twelve months, investing in the bar / restaurant after Cameron decided enough was enough following 25 years of service as manager of an ” Iceland ” depot in Kent, UK.

Three young sons of 14, 11 and 8 years occupy much of any spare time remaining.

Cameron attended the same Dartford grammar school as the infamous Rolling Stone, Mick Jagger, unfortunately his guitar and song writing skills weren’t up to scratch and Keith Richard replaced him.

Originally from Greenwich, the couple realised their ambition of a Spanish bar opening C.C.’s in January this year.

IS THE COAST FOR SALE AT ANY PRICE

Opposition parties demand Bascuñana and Aix listen to the Coast