Along with losing a plethora of personal items, Sarah was left heartbroken, when her in-laws ashes were washed away.

ALGORFA was one of the hardest hit town’s in the Vega Baja region that suffered devastating circumstances in September’s Gota Fria.

“This is my house – the yellow one,” devastated Sarah Broadbent from Algorfa told me, pointing to her house that is destroyed.

A scene not seen within the Vega Baja region in over a century has left many families homeless, along with the loss of everything they possessed.

“The damage caused is going to take years to repair – I have lost everything,” said tearful Sarah. 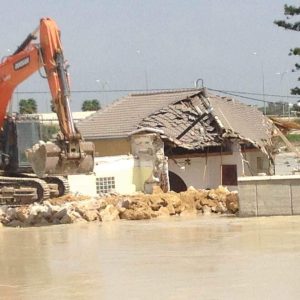 The Government has announced a 5million euros package to help rebuild the damage caused, with the Vega  Baja regions to benefit from the funding.

However no timescale has been given, as to when Sarah will be able to return to her home.

And at present Sarah says that permission to start rebuilding has not been given by authorities.

Many personal belongings have been lost and Sarah said: “Some things just cannot be replaced.”

Following the Gota Fria storms – the biggest storms in 150 years – Sarah has been left heartbroken, after ashes from in-laws were lost in the flooding.

“My in-laws ashes, that we needed to scatter, were lost,” said Stourbridge born Sarah.

Following the road between Algorfa and Almoradi being reopened, the aftermath and devastation the Gota Fria left behind is horrific and tragic, for those affected. 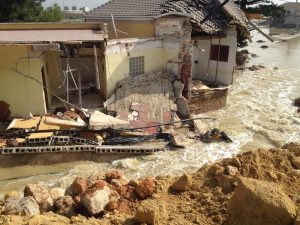 And, shockingly, robbers have been active in stealing items from properties damaged by the flooding.

“The main problem I’m struggling with now is what’s left of my house will be open to the thieves,” said Sarah.