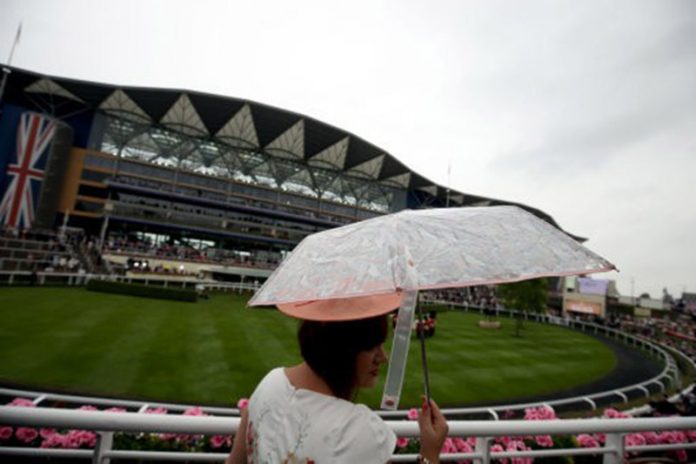 ASCOT’S waterlogged round course has lead to Clerk of the course Chris Stickels moving the three affected races on Saturday’s Qipco British Champions Day card to the inner hurdles track.

With rainfall having been persistent and with a forecast to continue on Saturday the straight course is riding heavy.

“There are concerns when ground is heavy – and rain forecast,” said Stickels.

The Fillies & Mares race, Long Distance Cup and Champion Stakes will now take place on the inner course. The ground is good to soft, soft in places.

The soft ground on the inner course (Swinley Bottom), is the softest on the round course, where racing was last staged in March.

Frankie Dettori has a winning purse beckoning – underlined with Stradivarius (4-6) in the Qipco British Champions race.

Dettori is up on Advertise (1.35) in the Qipco British Champions Sprint over 6 furlongs, selected each-way by fromthehorsesmouth.tips

The Tin Man (10-1) trained by John Fanshawe and Brando trained by Kevin Ryan (16-1) are also noted in the 17 runners field and selected each-way by fromthehorsesmouth.tips

Daniel Wildenstein trained The Revenant, winning at Longchamp on very soft ground, has seen a huge gamble to land the Queen Elizabeth II Stakes, backed from 25-1 to 9-4!.

The Champion Stakes is one race that O’Brien has yet to win. Japan and Magical, who went to post in the Prix de l’Arc de Triomphe, were entries, with O’Brien deciding to saddle Magical on the back of its Longchamp outing.

Addeybb trained by William Haggas and ridden by James Doyle has been well supported, at 5-2.

Mudlark Addeybb is set to relish in the Champion Stakes. Addeybb, who won the Wolferton Stakes in June, is a Royal Ascot winner, and will be asked to step up to the plate in Group 1 company.

Addeybb was defeated in the Group 1, 2018 Lockinge Stakes and in the 2018 Queen Elizabeth II Stakes on Champions Day.

A winner of the Lincoln and the Group Two bet365 Mile at Sandown, Addeybb is in good form.