MADRID born musician Esteban Fernandez was at the forefront of Gary Barlow and Take That’s group formation three decades ago – that lead to them becoming worldwide stars.

“My working time with Gary was at Manchester’s Bredbury Hall Country Club and Restaurant in Stockport,” Esteban told me.

“I was already resident there for quite a while,” said Esteban, married to Manchester born wife, singer/dancer Norma.

“The manager Mr Sykes told me that a new band was forming – and that the piano and singer was going to work with me,” said Esteban, resident in Dona Pepa, Alicante.

“I played alongside Gary until the band was ready to perform at Quaffers Discoteque and Night Club, that also belonged to the same Bredbury Hall company,” said Esteban.

Quaffers, a former golf club, opened in 1978 and hosted world stars, including Dame Shirley Bassey, The Stylistics, Edwin Starr  Dr Hook and The Drifters. It closed in 1998 and was bulldozed in 2004.

Take That appeared at Quaffers – to The Thunderbirds theme tune – with the stage rising up from the floor.

“Gary was a fantastic piano player – his voice was the best. As a composer with Take That Gary’s done it all!,” said Esteban, reflecting his time with singer, songwriter, musician, record producer, vocalist, pianist and keyboardist Gary. 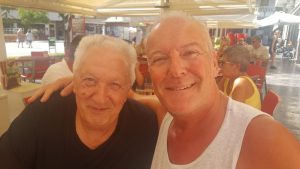 Gary, who credited Sir Elton John with inspiring him to play the piano, performed on the Northern Clubs circuit in the eighties, being paid £18 in early concert dates.

Gary’s ‘A Million Love Songs’ lead to Take That being formed around his vocals and songwriting skills.

And Esteban revealed that Gary was a bad time keeper: “The one thing that I will always remember was the fact that, on more than one occasion, I had to remind Gary to please keep on time!

“As, quite often, Gary used to be five minutes late – and it was something that did annoy me!,” laughed Esteban.

“Another time I recollect is when we were playing together – enjoying ourselves so much – that we played the song ‘When The Saints Go Marching In’, in FIVE different keys!,” said Esteban.

“We couldn’t stop playing the song. At times one of us thought of stopping – and the other would start all over again. We just couldn’t stop!,” said Esteban.