Two weeks into this term and already El Capitan look formidable opposition. The Hub are back to winning ways toppling the ” Toppers ” from the recently opened Tipsy Toad who remain pointless after two difficult opening games.

All teams / players should now be aware of the weekly bye in each division. To avoid a free week the committee have set up an ” lnter League ” match. Whilst not contributing to divisional statistics, they are designed to ensure members playing continuity with each venue enjoying unbroken match sequences. Cancellation of these games is not allowed unless a rearrangement is made. Format remains the same but only one leg per discipline. Captains are reminded to complete result sheets fully to include all finishes and 100’s plus rapid legs etc. Comply please.

Ale House Lads managed just two legs in this weeks tussle with current league champs El Capitan, who won nine legs on the trot, following the ” Lads ” out on D16 in the second triple.The hosts only other victory came via the unorthodox and likeable Andre Wing on D8. As expected Nigel Justice did plenty of damage finishing 4 legs for the visitors. The towering Arold Klimonis, he must be nearly 3 metres tall, recorded a tasty 180 in his winning singles. Unfortunately it wasn’t sufficient to gain the MOTM accolade, awarded to Justice, Karl Mallinson winning the hosts, after a superb encounter with Justice. 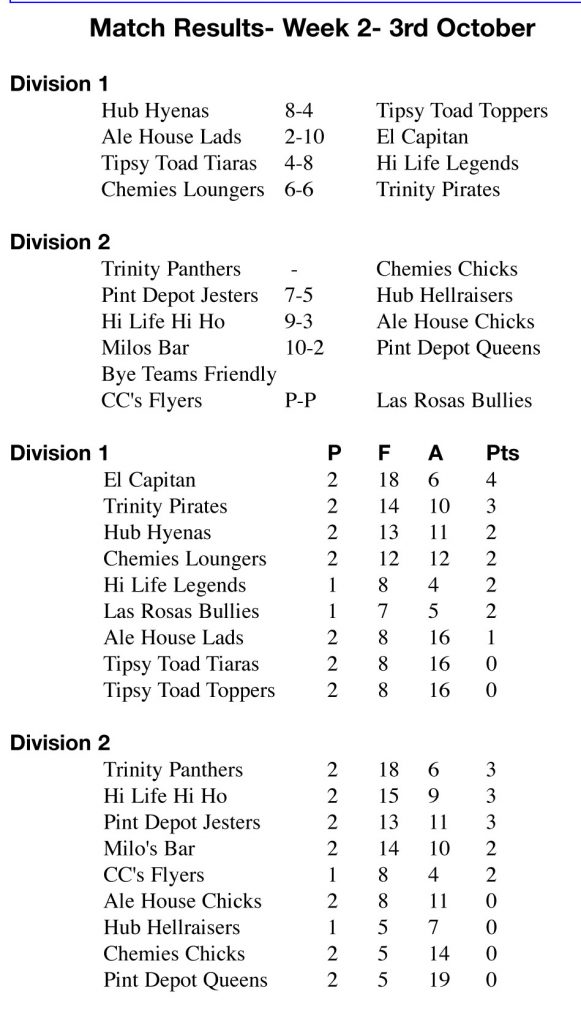 With both the Hyenas and Toppers losing their opening matches last week, each would have settled for a draw. Highlight of the first leg was Andy Gildea’s 74 checkout on T18, D10. Graham Solomon 140 and Joe Miller 100 contributing. Two pretty tame scoring legs followed, Hyenas taking both via Paul Durrant on D8 and D14. Solomon 100 and Gildea 121, 100, opened the pairs to make it all square, Solomon nailing both doubles, despite Russel Bond 120, 100, taking the middle leg on D12. Durrant 140, 115, 128, paired with Bob Taylor sharing the doubles, in a 2-0 victory over Lee Maiden and Hugh Galloway. A further 2-0 win from Miller 100,100,100, and Lee Holtham gave the hosts a 4-2 advantage at half time.

A short-handed Ale House Chick Team bravely faced the HI Ho’s silver lining team this week but MOTM Kathryn Higham had her work cut out for the chicks featuring in no  less than 5 games (2 triples, a pairs on her own, and two singles- drawing the wild-card for the final leg). Hi Ho Charlie Pritchett’s 20-20-D20 check- out with partner Stuart McRae dispensed with her solo in the pairs but finally warmed up, she took her first win in the last singles of the match against Tracey Betteridge.  Sonya Cooper, never far from the spotlight, got a couple of  finishes as did Margaret McKenzie, MOTM for Hi Ho.

Some new faces amongst the Hi Life Legends included the Crabbes (John and Sandra) and the Davids (Terry and SaRndra). Clattering down the steps to the Tipsy Toad, they arrived nice and early for an 8pm kick-off. This was the Tiaras first home game in their new venue and after a slight re-arrangement of furniture to afford great (ex)spectations they searched for the form that lead them to end up in Division 1 last season.

Sporting the walking wounded, landlady Lisa  Ivill hopped to the ochey in the third triples, physically assisted by Pat Schofield and hoyed in some solid throws with Pat finishing off on D20.  Pat then partnered Wendy Hayward, also on crutches, but none the less able bodied enough to pull off a D16 checkout with Pat’s D6 for our equalizer. A Sandra-Sarndra Legendary duet narrowly outstretched the Tracey Simpson and Elizabeth Cowan combo, who scored consecutive 123, 125 apiece but succumbed a 2-1 defeat.  A flurry of 3 ton plus score from Simone de Lacy and two 80+s from Lesley Eagles was thwarted by captains Roger Phipps first outing with two quick finishes.

His unrelenting pounding of the 19’s and two more quick finishes in his singles against Lesley earned him man of the match.  Sarndra was also in the frame for the title with two ton pluses in her account and 4 ‘out of nowhere’ finishes.  Simone and Elizabeth again won their singles 2 – 0 but it was this inimitable Pat Schofield who was awarded MOTM for her services with 3 leg finishes and oodles of 50+ scores.  Final Score  Tiaras 4 – 8 Hi Life Legends, two crutches and a handful of ibuprofen for aching backs and knees.

A very interesting ” Spot ” this week features Paul Lock one of our invaluable league sponsors.Paul, born in Sunderland, but spending 27 of his career years in Scotland defending British interests submerged in a nuclear submarine for 3 months at a time. The whereabouts of his numerous covert underwater exploits however, remain a closely guarded national secret.

Serving firstly on Polaris then Trident vessels, the weapons engineer would have been responsible for firing the onboard missiles in the event of war. Some responsibility. Whilst in the military, Paul developed a taste for the ” Queensberry Rules “. A pretty useful middle weight, winning the majority of his bouts in the annual Navy championships. After hanging up his gloves, Paul qualified both as referee and judge and was appointed in both capacities in the England finals, Sheffield.

Paul has 2 children, Christopher 28 and Natasha 23 and now shares his time with Sonya , both turning out for the ” HI Ho’s ” of High Life. Having spent the last 5 years in Spain our sea farer now runs a locksmith business helping out stranded motorists who have either locked themselves out or lost their keys. An armchair pro darts fan Paul follows Rob Cross and Phil ” The Power ” Taylor prior to his retirement.

A History of Darts in Spain